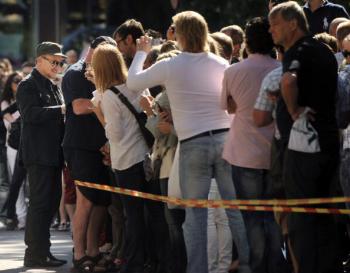 Bono (L), lead singer of Irish rock band U2 signs autographs for fans outside the Hotel Kamp in Helsinki, Finland on Aug. 20, 2010. (Petra Piitulainen/AFP/Getty Images )
US

U2 Announces Down Under Tour Dates

Raiatea Tahana-Reese
View profile
Follow
biggersmaller
Print
U2’s Bono is keen to return to the stage when the band brings its 360 Degree Tour Down Under at the end of the year, the AAP reports.

The Dublin-based Irish band has scheduled dates that start in Auckland on Nov. 25 at Mt. Smart Stadium.

Meanwhile, Bono is making a speedy recovery after undergoing spinal surgery in May, according to AAP.

The singer was left with partial paralysis in his legs after he was diagnosed with a herniated disc which forced the group to cancel a string of concerts.

Bono returned to the stage in Turin, Italy, earlier this month, just three months after his operation. Now he's keen to tackle more shows so the band is taking its 360 Degree Tour Down Under in December.

U2.com subscribers will be able to buy tickets ahead of the public ticket sale.