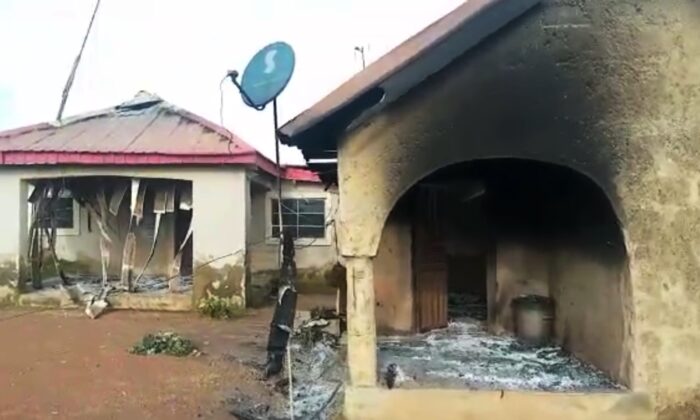 A screenshot from video of a burned orphanage in Plateau state, Nigeria, on Aug. 3, 2021. (Courtesy of Joshua Dickson)
Africa

They came to the orphanage without parents. As of the night of Aug. 2, they were homeless, too.

The only orphanage supported by a U.S. nonprofit in the conflict-devastated Jos area of Plateau State in Nigeria has been destroyed, but the staff and children are safe, according to Rev. William Murray, founder of the Religious Freedom Coalition.

“The 147 kids were evacuated to Jos,” said Murray, whose organization “has been financing the Binta orphanage for 10 years.”

In a video, Murray said many of the kids had been orphaned by previous Boko Haram and Fulani attacks, and now are spread out among individual homes in Jos. With all of the orphanage’s buildings destroyed, Murray said emergency funding is needed to take care of the children and rebuild the orphanage.

The children were among the 25,000 Plateau residents displaced from Miango and the vicinity, located northwest of Jos, Plateau State’s capital, by a series of terrorist attacks that began on July 31.

According to the Enos Hospital in Miango, 68 people have been killed. Alleged Muslim Fulani tribesmen have carried out the grimly familiar mass attacks at night on defenseless villages. Nearly all the victims are Christians. Seemingly related attacks were reported in neighboring Kaduna State in the region surrounding Kauru.

At least 13 survivors of the attacks are being treated for gunshot wounds at Enos hospital in Miango.

“Yes, we have survivors of gunshots. They were brought from villages,” Joy Hosea, a nurse with Enos Hospital Miango, told The Epoch Times. “There are 13 survivors with us receiving medical attention.

“We don’t have drugs to take care of them. They can’t pay hospital bills. We referred some to other hospitals in Jos. Many had lost a lot of blood due to bad roads from the villages.”

“The attackers came when the place was becoming dark around 7 p.m.,” a civilian neighborhood watchman, who declined to give his name for fear of retaliation, told The Epoch Times. “The Fulani got support from the Nigerian army. They were escorted by the army on three army vans.

“We saw them from afar coming in numbers,” the watchman said. “The soldiers did not help us. They allowed Fulani to burn down our houses.”

“I lost everything,” said Moses Kadiya, a displaced community health worker in Kpachudu.

“My plans were to launch my private clinic next month, but it burned completely. I came out with nothing but, trust God, I am alive.”

He said he believed the Nigerian army colluded with the marauding terrorists and that the government gave logistical support. Kadiya nonetheless remains optimistic. “I believe my community will be rebuilt and will be a big city.”

Jacob Randa, who works for an international Christian nonprofit, said: “I had gone to get data of widows and displaced people when the Fulani came. I went to a nearby community on motorcycle for data collection, but when I returned the following day, I saw my car burned at the main road.”

Ezekiel Bini, national president of Irigwe Youths, said, in tears: “We are suffering every day without help from the government. We lost 68 people from 13 different communities. More than 500 houses were burned, and crops destroyed.”

One Nigerian army soldier was also killed by the Muslim militants, Bini said, adding that the radicalized Muslim terrorists burned down five churches and wounded 24.

Critics of the government’s lethargic response to the attacks have expressed outrage. “The Fulani are given immunity and impunity as they are carrying out their genocidal agenda,“ Moses Gata, a human rights activist, told The Epoch Times.

“Christians are left with no other option but to believe that Operation Safe Haven and the Plateau State governor are in connivance with the killer herdsmen.

“How can we say we have a government when incessant attacks continued unchallenged in the same area for more than a week, and yet what we continue to get is a press statement.

“Total annihilation is the target of the perpetrators. The civil societies are not saying much. The state actors are quiet. The international communities are silent, the right people in positions to bring the situation to bear are not taking any action.”