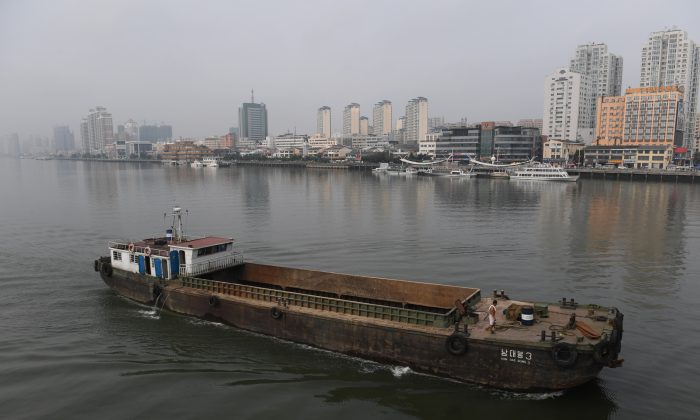 A North Korean ship passes in front of the waterfront of the Chinese border city of Dandong (at rear), in China's northeast Liaoning Province on Sept. 4, 2017. The U.S. Department of the Treasury added more than a dozen business entities to the list of companies targeted by U.S. sanctions against North Korea, including a Chinese company accused of helping the North Korean regime to develop weapons of mass destruction. (Greg Baker/AFP/Getty Images)
US-China Relations

U.S. Sanctions on Chinese Companies Doing Business With North Korea Are About to Get More Serious

More than a dozen business entities have been newly added to the list of companies targeted by U.S. sanctions against North Korea, one of which is a Chinese company accused of helping the North Korean regime develop weapons of mass destruction. The move is the latest in a string of actions taken by the Trump administration to crackdown on Chinese companies known for assisting the Kim Jong Un regime.

U.S. Department of the Treasury’s Office of Foreign Assets Control (OFAC) announced on Tuesday that one individual, 12 shipping companies, and 20 vessels “with long-standing commercial ties to North Korea” have been added to the U.S. sanction efforts against the totalitarian regime.

Of particular note is the Chinese company Dandong Dongyuan Industrial Co., Ltd (Dongyuan) and its owner Sun Sidong, which the OFAC said have been “associated with front companies for weapons of mass destruction-related North Korean organizations”.

According to OFAC, Dongyuan exported over $28 million worth of goods to North Korea over several years, including motor vehicles, electrical machinery, radio navigational items, aluminum, iron, pipes, and items associated with nuclear reactors.

“As North Korea continues to threaten international peace and security, we are steadfast in our determination to maximize economic pressure to isolate it from outside sources of trade and revenue while exposing its evasive tactics,” said Treasury Secretary Steven T. Mnuchin.  “We are also sanctioning the shipping and transportation companies, and their vessels, that facilitate North Korea’s trade and its deceptive maneuvers.”