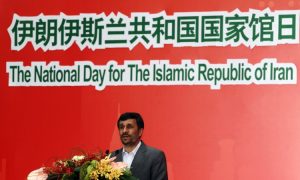 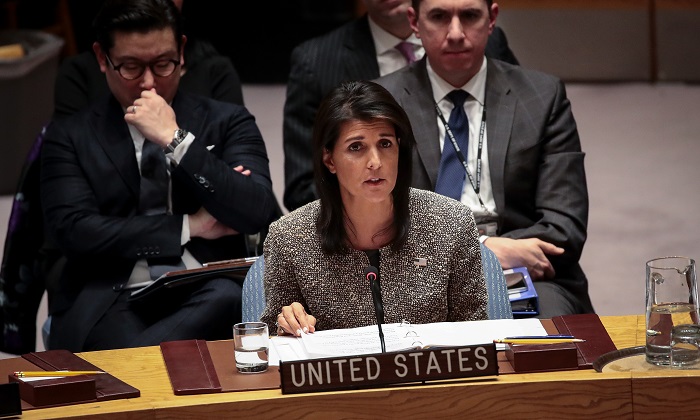 Nikki Haley, U.S. ambassador to the U.N., speaks during a meeting of the U.N. Security Council on Nov. 29, 2017 in New York City. (Drew Angerer/Getty Images)
US News

US Said It will Reveal how Iran Dishonored Nuclear Agreement

The United States will reveal “irrefutable evidence” that Iran knowingly dishonored its international obligations over its nuclear program.

Nikki Haley, the U.S. ambassador to the United Nations, will hold a press briefing on Thursday to highlight recent findings in the UN’s 2231 Implementation Report.

“During the briefing, Ambassador Haley will offer irrefutable evidence that Iran has deliberately violated its international obligations and has tried and failed to cover up these violations‎,” said a statement by the U.S. Mission to the U.N. on Wednesday.

“She will outline Iran’s ongoing destabilizing activities in the Middle East region and elsewhere in the world,” it said.

The press briefing will be held in Washington D.C.

U.N. Security Council Resolution 2231 endorsed the Obama-negotiated Iran nuclear agreement which called upon Iran not to partake in any activity associated with ballistic missiles for eight years, reported ABC News.

Haley’s scheduled briefing will be held a month before the Jan. 13 deadline when President Donald Trump needs to certify whether or not Iran has honored the deal and also agree on whether to prolong a waiver on sanctions.

"Iran’s missile launches should be a call to action. When a rogue regime starts w/ ballistic missiles, we'll soon have another N.Korea." pic.twitter.com/Bce0zCjRVv

Trump has long been a strong critic of the deal made in 2015.

“The nuclear deal threw Iran’s dictatorship a political and economic lifeline, providing urgently needed relief from the intense domestic pressure the sanctions had created,” Trump said Oct. 13 in a statement to the press.  “It also gave the regime an immediate financial boost and over $100 billion dollars its government could use to fund terrorism,” he said.

“The regime also received a massive cash settlement of $1.7 billion from the United States, a large portion of which was physically loaded onto an airplane and flown into Iran.”

"Iran hides behind its assertion of technical compliance w/the nuclear deal, while it brazenly violates the other limits.."
Amb. @NikkiHaley pic.twitter.com/xvHgx7d1cT

Trump also said Tehran has not fulfilled its obligations.

“[The] Iranian regime has committed multiple violations of the agreement. For example, on two separate occasions, they have exceeded the limit of 130 metric tons of heavy water. Until recently, the Iranian regime has also failed to meet our expectations in its operation of advanced centrifuges,” he said.

“The Iranian regime has also intimidated international inspectors into not using the full inspection authorities that the agreement calls for.

“Iranian officials and military leaders have repeatedly claimed they will not allow inspectors onto military sites, even though the international community suspects some of those sites were part of Iran’s clandestine nuclear weapons program.

“There are also many people who believe that Iran is dealing with North Korea,” he said.

Trump declared his decision not to certify Iran’s compliance on Oct. 13, prompting a 60-day period for the U.S. Congress to elect whether to reimpose sanctions lifted under the deal. That period ended Tuesday, Dec. 12, and Congress decided not to act, reported ABC News.

Today, I announced our strategy to confront the Iranian regime’s hostile actions and to ensure that they never acquire a nuclear weapon. pic.twitter.com/N4ISdjuEdC

Among incidents in the report, which Haley is expected to build upon during the briefing, are details regarding Iran’s ballistic missile tests and its alleged transfer of missiles and arms. It is also expected that Haley will point out Iran’s support of Houthi fighters in Yemen.

Iran has said its nuclear program is non-military in nature.

Think your friends may not know about this? Share it on Facebook and you will help keep them up to date and help us earn the ad revenue we need to keep reporting. Thank you very much!