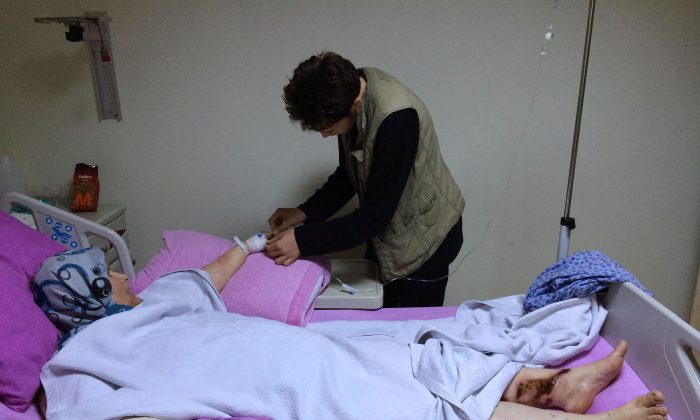 In this picture taken with a mobile phone on Saturday, Oct. 24, 2015, a Syrian boy Abdulhamid Khanfoura, 16, background, helps his wounded mother Zahra Khanfoura, 48, who was burned by a Russian airstrike that hit her house in the central Syrian village of Habeet, as she lies on her hospital bed in the southern city of Kadirli, Turkey. Zahra's granddaughter Raghad was among dozens of civilians who activists say have been killed in the Russian air campaign in Syria, which Moscow says is aimed at crushing the Islamic State group and other Islamic militants. (AP Photo/Hussein Malla)
Europe

U.S.-Russia Alliance in Syria Looking Unlikely Because of Civilian Casualties

Russia’s increasingly large role in the Syrian civil war would get even bigger if the U.S. became an ally, but that’s become increasingly unlikely because of civilian casualties.

Speaking on condition of anonymity, officials said that the United States, by working with Moscow militarily in Syria, could be seen as complicit in the killing and wounding of civilians.

Russia’s apparent lack of regard for the casualties contributes to the decreasing likelihood of an alliance.

Colonel Steve Warren, a Baghdad-based spokesman for the U.S.-led coalition, said figures from non-governmental groups of the civilian death toll are “fairly accurate.” One estimate, from the Syrian Observatory for Human Rights on Nov. 20, said that at least 403 civilians, including at least 160 women and children, have been killed in Russian airstrikes.

“This is sloppy military work,” Warren said of the Russian airstrikes. “This is the reckless and irresponsible, imprecise and frankly uncaring approach to operations in Syria that the Russians have taken on.”

But Russia denies that it’s killed civilians, and slammed reports that it has targeted medical facilities.

The news about the potential alliance comes after Turkey, a fellow NATO member, shot down a Russian fighter jet that it said violated Turkish airspace near the border of Syria.

The U.S., including President Barack Obama, supported Turkey’s claim to a right to defend itself, as did NATO.

There has also been concerns about some Russian airstrikes targeting not ISIS, but instead rebel groups opposed to Syrian President Bashar al-Assad. Russia and Assad are allies.

Another notable Russian partner in the region is Egypt.

The partnership was tested when terrorists in Egypt shot down a Russian plane earlier this year, but Shoigu pledged that the countries’ partnership would help defeat ISIS and other terror groups in Egypt.

There was no mention of Egypt assisting with the missions in Syria.