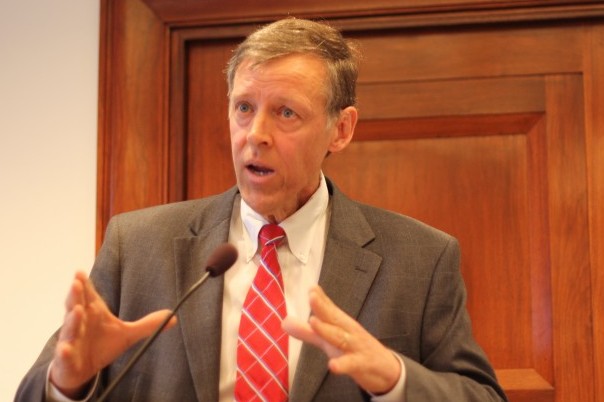 Robert D. Atkinson in the Dirksen Senate Building in Washington while giving his address on how to deal with Chinese mercantilist trade practices. (Matthew Robertson/The Epoch Times)
US

U.S. Must ‘Contain and Roll Back’ Chinese Mercantilism, Report Says

WASHINGTON—How would you like to play basketball with an opponent that insisted on lowering his net by three feet and refused to dribble the ball?

That’s what confronts the United States in its trade relationship with China, according to a recent hard-hitting report—and something’s got to give.

Robert D. Atkinson, president of the Information Technology & Innovation Foundation (ITIF) and author of the report, likened the challenge posed by the Chinese regime’s industrial policy to the Cold War that faced the United States decades ago: “George Kennan said ‘contain and roll back’ Soviet expansion. We’ve got to contain and roll back Chinese innovation mercantilism,” Atkinson said to a standing-room-only crowd in Washington. “The first thing is to recognize what a big and severe issue this is.”

There is no shortage of evidence for that. In 2011 China exported $276.5 billion more worth of goods to the U.S. than the U.S. exported to China. The biggest volume of export by the United States to China is waste paper and scrap metal. Millions of U.S. jobs have been wiped out as a consequence of strategic Chinese industrial policy.

“China is practicing economic mercantilism on an unprecedented scale. China seeks not merely competitive advantage, but absolute advantage,” the report says in its opening salvo.

The take-no-prisoners approach to trade, led by the communist Party-state, flies in the face of global norms and has a series of destructive secondary impacts, the report indicates.

“China fundamentally switched strategies” from receiving foreign investment to starting to directly compete with its investors in 2006, Atkinson said. That’s when the policy of “indigenous innovation” was rolled out in a government document.

“The [report] said, ‘Every technology that we can imagine is what we want to be good at,'” Atkinson said.

It was later narrowed down to seven key sectors. When it began to be seriously implemented throughout the regime’s vast bureaucracy in 2009, often promoted as a nationalist call to arms, multinational companies started feeling the pain.

Indigenous innovation is characterized by “assimilation, absorption and re-innovation” of foreign technology, according to the original Chinese document.

In practical terms this means industrial theft on an unprecedented scale, according to a U.S. Chamber of Commerce report in 2010.

The Chinese regime thus sends spies to infiltrate Western firms to steal trade secrets, and uses hackers to exfiltrate technology from their computer systems directly. Chinese IP theft is estimated to have cost U.S. firms $48.2 billion in 2009, according to the United States International Trade Commission.

The Communist Party plans to make the seven key sectors 15 percent of Chinese gross domestic product by 2020, and to that end have announced an investment of $1.5 trillion over the next five years. Atkinson points out that the sum, comparatively, would be as if the United States passed an American Recovery and Reinvestment Act every year for five years, and pumped the capital into only seven industries.

“What China is doing is unprecedented,” he added.

The correct response for the United States lies somewhere between a protectionist backlash and waiting it out, Atkinson says. That is where he invokes the Cold War analogy.

He suggests that the USTR be commissioned to conduct a study as to what levers the United States has to address the damaging Chinese trade practices. Having the agency bring trade enforcement cases against Chinese companies directly may absolve U.S. firms from retaliation, for example.

Giving high-tech companies an anti-trust waiver so they can together agree not to hand over technology would be another tool. At the moment the Chinese regime plays one company off another, demanding that they give up key technology in exchange for entry into China’s supposed vast consumer and industrial market.

Fundamentally he suggests a results-based strategy rather than the current “whack-a-mole.” This would set terms that China is expected to meet, such as a reduction of its trade surplus, or curtailment of piracy, and provide consequences for failure to deliver.

To those worried about a trade war between China and the United States as a result of the latter’s cracking down, Atkinson has a simple answer: “That has been going on for 5 or 10 years. They’ve shot most of volleys, and we’ve been losing.”