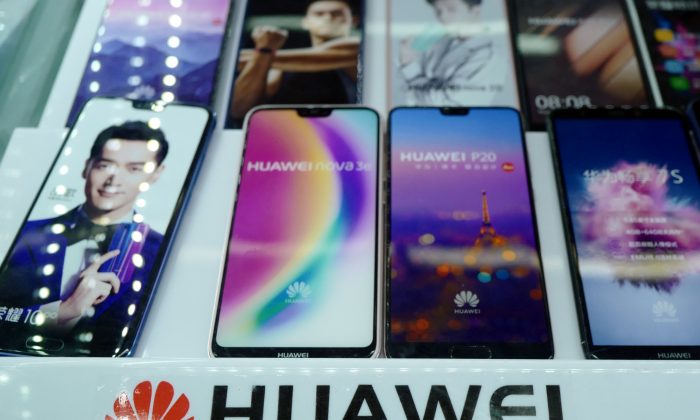 Huawei smartphones on display in a shop in Shanghai on May 3, 2018. Chinese mobile manufacturers Huawei and ZTE have come under U.S. scrutiny for security reasons as the trade battle between China focuses on technological issues. (Johannes Eisele/AFP)
China-US News

The Pentagon has ordered U.S. military bases around the world to pull all smartphones made by Chinese manufacturers Huawei and ZTE from stores, so as to avoid compromising the security of U.S. military service members.

Last week The Epoch Times reported that Chinese-made Huawei smartphones were among the electronic products being sold at the Army and Air Force Exchange Service (AAFES) stores of several U.S. military bases in Germany. Service members are only supposed to use the phones privately, but experts said the devices could be spying on their users.

The Pentagon has decided to ban the Department’s exchange service stores from selling them.

“Huawei and ZTE devices may pose an unacceptable risk to Department’s personnel, information and mission,” said Pentagon spokesman Major Dave Eastburn. “In light of this information, it was not prudent for the Department’s exchanges to continue selling them to DoD personnel.”

U.S. service members are still allowed to buy ZTE and Huawei phones elsewhere and carry them for personal use. However, simply by carrying these phones, soldiers, even if they only use the phones for their private communications, run the risk of falling under Chinese surveillance.

The Pentagon is currently reviewing whether to issue a wider advisory warning to U.S. service members about the risk of using phones made by these two Chinese brands, said Eastburn, although technical aspects of the potential threats were not revealed by the Pentagon.

Many U.S. intelligence officials and members of congress consider Huawei devices to pose a national security threat. In February, the heads of the CIA, FBI, National Security Agency, and others testified before a Senate hearing, and all of the witnesses at the hearing said that Americans should not use Chinese smartphones manufactured by Huawei and ZTE.

“We’re deeply concerned about the risks of allowing any company or entity that is beholden to foreign governments that don’t share our values to gain positions of power inside our telecommunications networks,” said FBI Director Christopher Wray. “It provides the capacity to maliciously modify or steal information, and it provides capacity to conduct undetected espionage.”

A recent U.S.-China Economic and Security Review Commission report also said that, on average, 51 percent of the parts for IT equipment supplied to the U.S. government comes from China. The report says this reliance on Chinese parts constitutes a great risk to U.S. national security, economic competitiveness, and the privacy of American citizens.

Huawei was targeted prominently by the report, which said that the company has extensive ties with the Chinese regime. Ren Zhengfei, the founder of the company, was a former officer in the People’s Liberation Army. He continues to run the company today.

Huawei has consistently denied the allegation that its devices could be used by the Chinese regime for spying and has always maintained that the company is owned by its employees. However, U.S. officials have continued to warn Americans not to use Huawei phones.