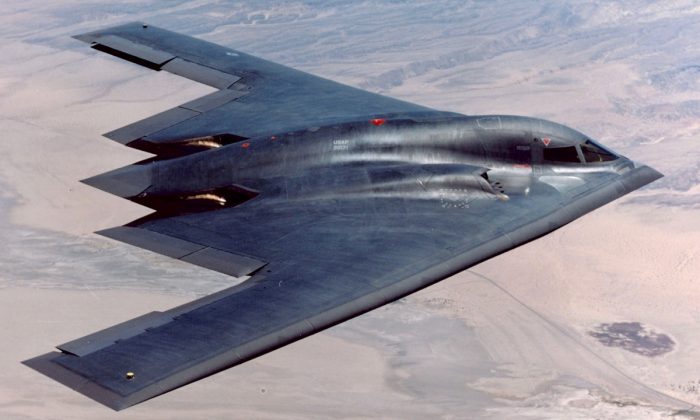 The Pacific Air Forces announced the deployment of three B-2 Spirit aircraft, along with 200 U.S. Air Force airmen on Jan. 9, according to the Washington Examiner. The B-2s will supplement the Andersen Air Force Base’s supply of B-1 Lancers.

Guam has been a key U.S. territory for military might in Asia since World War II. Besides its strategic location in the Pacific, allowing access to Asia, it provides support activities to the U.S. military. Last summer, Guam became the target of bombing threats by the North Korean regime.

Even with U.S. bases located much closer to North Korea, Guam is still a key location. As Pacific Daily News reported, unlike other U.S. military bases in the region, the United States maintains the most decision-making freedom on Guam.

The deployment announcement of the stealth aircraft came the same day North Korean and South Korean delegations held talks, the first time since 2015. As a result of the talks, North Korean representatives said they will send athletes and a delegation to the Pyeongchang Winter Olympics, Reuters reported.

“I think President Trump deserves big credit for bringing about the inter-Korean talks,” South Korean President Moon Jae In said at a news conference. “It could be a resulting work of the U.S.-led sanctions and pressure.”

The head delegate from North Korea at the talks said that his regime’s weapons are only pointed at the United States and not at Russia, China, or South Korea. He made the comments while refusing questions from South Korean delegates about his regime’s nuclear program, reported Fox.

Experts had suggested that North Korea proposed the talks as a way to disrupt cooperation between South Korea and the United States, but South Korean representatives claim that they support the position of President Trump on denuclearizing North Korea and will not sway.

“South Korea will go in tandem with the United States in dealing with North Korea,” said Moon’s Special Adviser for Foreign Affairs and National Security, Chung-in Moon, via Fox. “Precisely”