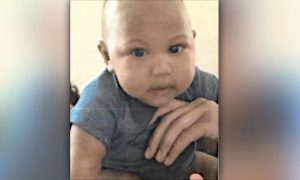 A child who was allegedly abducted in West Virginia was discovered on Aug. 1 in Texas, according to reports.

Arlie Edward Hetrick, 26, was suspected of having abducted Gracelynn, 4, out of Marion County. He was identified as the girl’s father, reported WV News.

“Deputy U.S. Marshals from the Clarksburg office have worked diligently alongside the West Virginia State Police to locate this at-risk child and bring the perpetrator to justice,” said Alex P. Neville Sr. with the U.S. Marshals, reported the Times West Virginian. “We are pleased to announce the child appears to be in good health and has been turned over to child protective services.”

Hetrick was taken to the Reeds County, Texas, jail on a warrant.

Last week, an AMBER Alert was issued for the child, according to the WV News.

“By taking dangerous fugitives off the streets and seizing illegal narcotics and currency, we put an immediate end to their unlawful activities,” said a local U.S. Marshals official told the Times. “This is significant, since many of these fugitives are repeat offenders.”

Pecos, Texas, is about 1,600 miles away from Marion County, West Virginia.

The center said that it participates in the Amber Alert Program, which is a voluntary partnership between numerous entities including broadcasters, transportation agencies, and law enforcement agencies. The Amber Alert Program issues urgent bulletins in the most serious child-abduction cases.