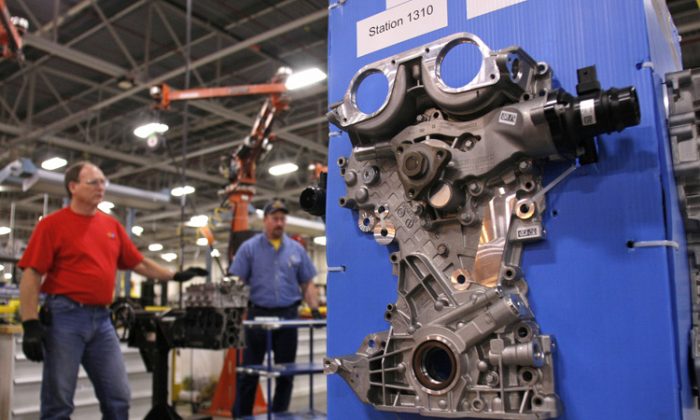 An engine part is displayed as GM workers demonstrate an assembly process of the Ecotec engine for news media at the General Motors Flint Engine Operations plant in Flint, Mich., in this file photo. Panelist participating in a Brookings Institution forum see U.S. manufacturing in need of a makeover. (Bill Pugliano/Getty Images)
Business

WASHINGTON—When California-based telco Qualcomm was ready to go into production for its new display technology for mobile devices, it had to make a decision where to manufacture it. The technology required an expertise in glass products—could the United States do it or would it have to go offshore?

“We decided to build in Taiwan,” says Qualcomm founder Dr. Irwin Jacobs, citing two key reasons. First, the Taiwanese were knowledgeable about glass and had a whole “eco-structure” to service the industry.

Second: “Tax policy.” The capital saved can go back into investment but not back into the United States, Jacobs said. “If one brings capital back onshore you have to pay the difference between the tax rate paid offshore, which is much, much lower, and the U.S. tax rate, and so that is a disincentive to bring that cash back.”

Jacobs was articulating some of the issues being discussed as part of a broader debate on the revival of manufacturing in the United States.

During the last century, America’s great wealth was built on the strength of its manufacturing, but its decline from a 21 percent share of employment in the 1980s to around 9 percent in December 2009, has hit home. Between 2001 and 2009, more than 6 million jobs—or on average 50,000 jobs a month—were lost in the U.S. manufacturing sector.

So penetrating had the decline become that last year it became an issue of national security. Concerned over the loss of industrial capability, particularly in key security areas, the U.S. director for National Intelligence announced a national intelligence estimate (NIE), one of the intelligence community’s most comprehensive intelligence reports, on the state of American manufacturing, the website Manufacturing News reported.

President Barack Obama has endeavored to address the decline, signing on with Congress’s bailout of the automotive industry, offering tax breaks, and focusing on training programs to up-skill workers.

The “blueprint” for a strong U.S. economy “begins with American manufacturing,” he said in his State of the Union address.

While it is easy to point to cheaper manufacturing options overseas as the major contributor to U.S. manufacturing decline, there are more complex factors at play, says Dan Breznitz, associate professor at Georgia Institute of Technology’s College of Management. They are to do with a spectrum of outmoded but interrelated attitudes, structures, and policies within the United States.

“The world has changed but theories and public policy have not,” he said.

Dr. Breznitz was speaking at a forum on Why–and which-manufacturing matters, hosted by the Brookings Institution in Washington, D.C., last week. Qualcomm’s Jacobs was the keynote speaker.

In opening the forum, Peter Cowhey, dean of International Relations and Pacific Studies at the University of California, said the United States was still a world leader in innovation and competitive in new industries like high value technologies. In more traditional industries, however, innovation was lacking. Consequently, the country is lagging behind other industrial nations.

Cowhey and Breznitz have co-authored a report on manufacturing, which argues that policy largely supports innovation in the sense of creating a new product, but it does not support innovation in updating or consolidating industries—the exact area where American manufacturing is falling behind.

Process or incremental innovation, they say, is about revamping not only outdated modes of production but attitudinal frameworks and business models. Present policy sees manufacturing as single company entities with the idea the marketplace will sort out winners and losers, but businesses today need policies directed at whole “eco-systems” in an industry, much like what Jacobs was referring to in Taiwan.

To achieve that, U.S. businesses have to learn to work more cooperatively and share resources, assets, and knowledge.

Many companies already share production assets says Cowhey, citing the industrial cluster around San Diego where some of the small bio-tech companies can access state of the art scientific equipment that they could never afford to secure alone.