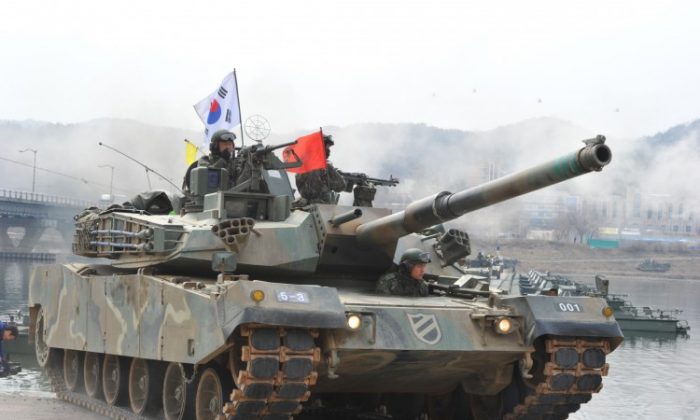 A South Korean K-1 tank moves over a temporary bridge during a river-crossing military drill in Hwacheon near the border with North Korea on April 1. The United States sent F-22 fighter jets to join the South Korean Drills. (Kim Jae-Hwan/AFP/Getty Images)
Asia & Pacific

North Korean leader Kim Jung Un has become a quote machine for inflametory statements over the past month.  Directly threatening the United States and South Korea, declaring a “state of war” and cutting of the limited means of peaceful communication between the two Korea’s.

On March 31 Kim, called North Korea’s nuclear program “the nation’s life” and said dismantling the program was not an option.  This after repeated requests by the United States and South Korea, as well as U.N. sanctions aimed at pressuring the country to scale back its nuclear efforts.

North Korea’s statements appear intended to provoke South Korea, analysts say.  A statement released by Korean Central News Association (KCNA), March 31, threatened to shut down access to the Kaesong Industrial Complex, an economic joint venture between the North and South, that is one of the few remaining ties between the two contries.

Shutting down Kaesong would only further damage North Korea’s weak economy. But Kim seems more concerned with talking tough then for the wellbeing of his impoverished people.