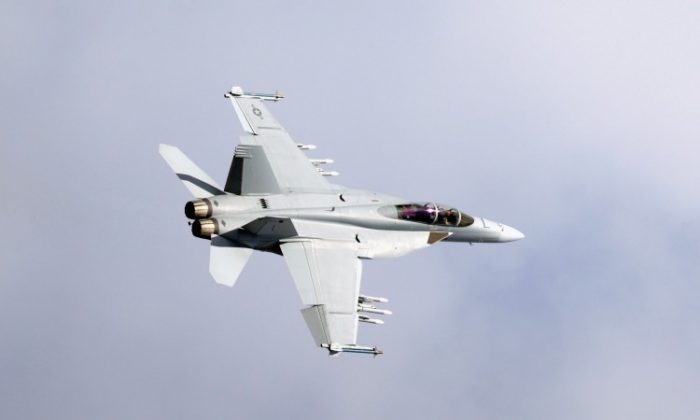 An F-22 Fighter plane takes off at the Farnborough Airshow on July 20, 2010 in Farnborough, England. (Dan Kitwood/Getty Images)
Asia & Pacific

Reuters reported that the F-22 Raptors, which can evade radar, were sent to Osan Air Base, the main U.S. Air Force base in the country.

“(North Korea) will achieve nothing by threats or provocations, which will only further isolate North Korea and undermine international efforts to ensure peace and stability in Northeast Asia,” the statement reads.

Officials said that the F-22 deployment demonstrates the U.S.’s commitment to defending South Korea against any potential attack, according to South Korea’s Yonhap News Agency.

The move comes just a few days after the U.S. sent B-52 bombers and B-2 nuclear-capable stealth bombers to South Korea. U.S. Defense Secretary Chuck Hagel said the move was not intended to provoke Pyongyang.

Tension on the Korean Peninsula have been high since February when the North carried out its third nuclear test, contravening United Nations sanctions, which drew condemnation from the U.S., the U.N. Security Council, and others.

“We’ve seen reports of a new and unconstructive statement from North Korea. We take these threats seriously and remain in close contact with our South Korean allies,” said Caitlin Hayden, a spokeswoman for the White House National Security Council. “But, we would also note that North Korea has a long history of bellicose rhetoric and threats, and today’s announcement follows that familiar pattern.”

North Korea’s threats are seen as part of an effort to provoke the new government in Seoul to change its policies toward Pyongyang, and to win diplomatic talks with Washington that could get it more aid.