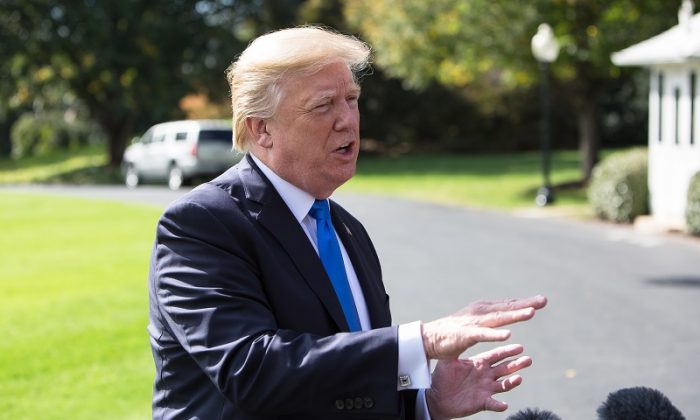 President Donald Trump talks to the press before leaving the White House from the South Lawn in Marine One on Oct. 25, 2017. (Samira Bouaou/The Epoch Times)
US News

Growth would have been around 3.5 percent, excluding the weather impact, says Citigroup
By Emel Akan

The U.S. economy grew at a higher rate than expected in the third quarter, buoyed by strong inventory investment, consumer spending, and a lower trade deficit.

Real gross domestic product (GDP) surged by 3 percent in the third quarter, according to the “advance” estimate released by the Bureau of Economic Analysis (BEA). This is slightly lower than the 3.1 percent increase in the second quarter.

Economists polled by Reuters expected weaker growth—2.5 percent for the third quarter—due to a drag from hurricanes Harvey and Irma.

“Despite the damage from this year’s hurricane season, the U.S. economy grew at 3 percent for the second quarter in a row,” stated White House press secretary Sarah Sanders, in a press release.

“With unemployment at a 16-year low, the stock market at new highs, and economic confidence soaring, the U.S. economy is surging under this president’s leadership.”

President Donald Trump has focused on a sustained 3 percent growth rate and said previously it could go even higher.

The hurricanes caused severe disruptions in several states along the Gulf Coast during the third quarter. These disasters affected the operations of factories, offices, and transportation centers, stated the Commerce Department.

For example, storms disrupted oil and gas extraction and petroleum and petrochemical production in Texas and agricultural production in Florida during August and September. However, it is not possible to estimate the overall impact of the hurricanes on the third quarter GDP, said the commerce department.

According to Citigroup economist Andrew Hollenhorst, the GDP has been increasing above trend and the ISM Manufacturing Index, a survey of 300 manufacturing companies that monitors employment, production, inventories, new orders, and supplier deliveries, is at a historic high, pointing to further strong results ahead.

“The most positive recent development, in our view, is the continued expansion in investment spending,” wrote Hollenhorst.

“Without the drag from the hurricane, growth would have been around 3.5 percent,” he said.

The solid growth in business spending was driven by investments in inventory, equipment, and intellectual property.

Trump’s pro-growth policies have raised business optimism since the election and encouraged companies to invest more, according to Stephen Moore, an economist at the Heritage Foundation and former economic adviser to Trump’s 2016 presidential campaign. After years of underinvestment, companies are investing in computers, technology, and equipment.

Business investment in equipment grew at a rate of 8.6 percent, increasing for the fourth consecutive quarter. The increase in inventory investment mainly reflects increases in wholesale and manufacturing inventories.

Consumer spending, which accounts for more than two-thirds of U.S. economic output, increased at a 2.4 percent annual rate in the third quarter. And in September, consumer spending increased by 1 percent, marking the largest month-over-month gain in eight years. Consumers spent more on motor vehicles and utilities.

Consumer spending has surpassed disposable income growth during the past five quarters. As a result, the saving rate (saving as a percentage of disposable personal income) fell to 3.1 percent in the third quarter from a 2016 average of 4.0 percent.

“High levels of consumer sentiment and the recent gains in housing values and stock-market wealth have supported growth in consumer spending and the accompanying decline in the saving rate,” said Council of Economic Advisers Chairman Kevin Hassett at a hearing on the nation’s economic outlook before the U.S. Congress Joint Economic Committee on Oct. 25.

But rising sentiment is not the sole factor driving spending. Motor vehicle purchases surged in the aftermath of two hurricanes, according to estimates.

The administration’s efforts to improve the regulatory landscape as well as tax reform will stimulate economic growth, said Hassett.

The Consumer Confidence Index surged to its highest level in almost 17 years, according to the Conference Board. The index rose to 125.9 in October, from 120.6 in September, and beat market estimates.

“Consumers’ assessment of current conditions improved, boosted by the job market, which had not received such favorable ratings since the summer of 2001,” stated Lynn Franco, director of economic indicators at The Conference Board.

According to Franco, consumers were much more upbeat about the short-term outlook, primarily due to the prospect of improving business conditions.

“Confidence remains high among consumers, and their expectations suggest the economy will continue expanding at a solid pace for the remainder of the year,” she said.