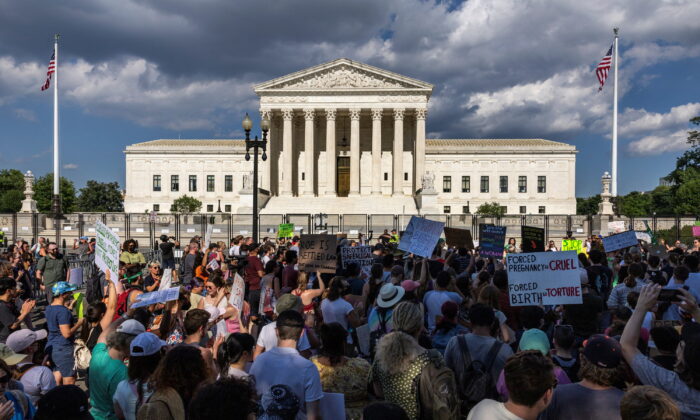 US Constitution Should Include Amendment Stating the Supreme Court Has 9 Justices, Proponents Say

As Democrats promote legislation to add four justices to the Supreme Court, a bipartisan countereffort is moving to ban court packing permanently.

“We think it could be a really critical issue in the 2022 elections,” Roman Buhler told The Epoch Times.

Buhler, an attorney and longtime political adviser, is executive director of Keep Nine, an organization pushing for lawmakers to amend the Constitution and codify that the U.S. Supreme Court must have nine justices.

Despite numerous admonitions from Democrats regarding the risks of court packing, Buhler said he and his colleagues began hearing chatter on the left about packing the court in early 2019, just after Republican Senate Majority Leader Mitch McConnell said he would confirm a Trump nominee if a Supreme Court vacancy occurred in 2020.

Calls to pack the court rose to a fever pitch after President Donald Trump’s nomination of Amy Coney Barret. Known to be pro-life, Democrats worried her rise to the Supreme Court would herald the demise of Roe v. Wade, a fear that came to fruition in June.

Despite the clamoring of Democratic politicians, the media, and pro-abortion activists, Buhler warns that the idea of court packing “is not very popular” with most voters.

According to an October 2020 Washington Examiner/YouGov Poll, more than 60 percent of registered voters surveyed said they opposed packing the court with liberal justices if more seats were added to the court. While 47 percent said they would prefer to see a balanced court if it were expanded with additional seats, only 11 percent said they wanted the court to be “overwhelmingly liberal.”

Even 52 percent of Democrats surveyed said they wanted the court to be balanced, with only 38 percent saying they wanted it to have a liberal majority.

Ultimately, the survey showed that 47 percent were against adding more seats to the nine-member Supreme Court, while only 34 percent were in favor of the idea.

Even the late Justice Ruth Bader Ginsburg, a liberal icon of the Supreme Court for over 25 years, strongly opposed court packing and said so in a 2019 interview with NPR.

“I have heard that there are some people on the Democratic side who would like to increase the number of judges,” Ginsburg said. “Nine seems to be a good number. It’s been that way for a long time.”

Buhler said Democrats “almost certainly lost” the 2020 Senate race in Maine because of the court packing issue, and that they may have lost races in other states for the same reason.

“Now what you’re seeing is Democrats in tight races across the country. But while all of them say they oppose court packing, none of them are willing to endorse an amendment that would ban court packing,” he said. “So swing voters might reasonably ask, if a candidate says they’re against court packing but won’t back an amendment to ban it, isn’t their position that they don’t really want court packing today but they want to reserve their power to pack the court tomorrow? That’s not a position I think swing voters would like very much.”

In May 2022, after the leak of the Supreme Court’s draft opinion in Dobbs v. Jackson indicated that Roe v. Wade would likely be overturned, an organization called First Liberty released the results of a poll conducted by Mason-Dixon Polling & Strategy.

In the current political environment, Buhler said more people are realizing that court packing is a very serious threat, not just to conservatives who are relatively content with most of the recent decisions of the court, but to Americans who realize than an independent court is the one thing that protects the people against the abuse of power by politicians in either party.

“What it shows is the American public still believes in an independent Supreme Court,” Buhler contends. “The more people realize that court packing is a threat, the more people are looking for a way to stop it. Our mission is to educate people about the Keep Nine Amendment that would ban court packing permanently.”

On April 9, 2021, President Joe Biden issued an executive order forming a commission to conduct a 180-day study of potential changes to the Supreme Court, including court packing and term limits for justices.

In December 2021, the commission unanimously approved a nearly 300-page report that said very little about the number of Supreme Court justices. Only one chapter—28 of the 300 pages—was dedicated to the topic of court packing, and rather than making any formal recommendations, the report simply laid out arguments for and against it.

On July 18, seemingly in retaliation for the Supreme Court’s Roe v. Wade ruling, House Democrats called for the addition of four justices to the court via the 2021 Judiciary Act, which was introduced in Congress in 2021 but never brought to a vote.

Rep. Hank Johnson (D-Ga.), the lead sponsor of the legislation, described the current 6-3 conservative makeup of the court as “a Supreme Court at crisis with itself and with our democracy,” asserting that “it’s making decisions that usurp the power of the legislative and executive branches.”

According to Buhler, there are about 50 Democrats who openly support the expansion of the court, and about 250 Democrats who have refused to support an amendment that would prohibit court packing.

“The conclusion one might reasonably draw is that, if someone doesn’t want to support an amendment to ban court packing, they want Congress to keep the power to pack the court so they can do it the next time they have enough votes,” Buhler surmised.

Buhler worked with Ed Meese, who served as attorney general under President Ronald Reagan, to put together a bipartisan team of 17 former state attorneys general who support the Keep Nine Amendment.

They have been working on it ever since.

The Keep Nine Amendment was first introduced in Congress on Sept. 24, 2020, by then-Rep. Collin Peterson (D-Minn.). The measure had four Republican and one Democratic cosponsors.

The legislation has received endorsements from the Republican National Committee, Tea Party Patriots Action, and Americans for Limited Government. There are also governors, lieutenant governors, more than 1,000 elected officials in state legislatures from across the country, and over 200 members of Congress supporting the measure.

Another organization to endorse the Keep Nine Amendment is the National Federation of Republican Women (NFRW). For Martha Jenkins, a former vice president of NFRW, the amendment is a priority.

“When my term [as NFRW vice president] ended I just stayed involved with the amendment effort,” Jenkins told The Epoch Times.

Jenkins said the idea is to permanently prevent expansions or reductions of the court for partisan reasons by adding the following wording to the Constitution: The Supreme Court of the United States shall be composed of nine justices.

“That’s the exact wording of the amendment,” she said. “No more, no less.”

The Constitution currently allows Congress to change the number of justices on the court, Jenkins said.

“The people backing this amendment believe that since it’s been nine [justices] for over 150 years and it’s such an institution in American life, if there are calls at this point to add justices, that would keep the court from being independent,” she said. “The founding fathers set up the lifetime appointment for justices so they would not be swayed by political winds. The whole idea was they would interpret the law, moderate and check the powers of the other two branches.”

“Looking back in history, at that time there was a lot of discussion going on in Washington D.C. about the Supreme Court justices being appointed by President Trump and President Biden, and the Democratic leaders in Washington started talking about changing that, so I started doing some research to find out the history of the Supreme Court to find out why we have nine and where it started,” Penny told The Epoch Times.

The Supreme Court began with six justices when it was established in 1789, but it was subject to political maneuvering by Congress and the White House whenever the balance of power shifted. During the court’s first 80 years, the number of justices legally allowed on the bench changed seven times and ranged from just five to as many as 10 justices.

In 1869, the makeup of the court changed again to nine justices, where it has remained ever since.

“I am very adamant that our Constitution calls for things to be done a certain way,” Penny said, “and I wanted to make sure we ran a resolution we could pass on to our colleagues in Washington, saying ‘North Carolina wants to keep it the way it is.'”

Penny said packing the Supreme Court would affect everything in the country.

How to Get Involved

Buhler said Keep Nine is the most popular Supreme Court reform in the country among both Republicans and Democrats. But in late January 2021, Google blocked the advertisements of Keep Nine, a move the organization labeled as “bizarre.” By early February, the Big Tech giant reversed its decision, claiming the ad against court packing was “flagged by mistake.”

As the Keep Nine effort again gains traction, The Epoch Times asked Buhler how interested citizens could get involved.

“The first thing we would like people to do is to reach out to us,” Buhler said, “because what you can do depends on what state you live in. The politicians who will listen to you are the politicians you can vote for and your family can vote for.”

He suggested people visit the Keep Nine website or reach out to the organization via email.

“Our goal,” Buhler said, “is to build a grassroots organization all over the country—a network, really—of people who will help educate their friends and their family and other voters about the importance of the Keep Nine Amendment for preserving the democratic process and the Constitutional checks and balances that we rely on to preserve our liberty.”

The Epoch Times reached out to Rep. Hank Johnson and Sen. Ted Cruz for comment.