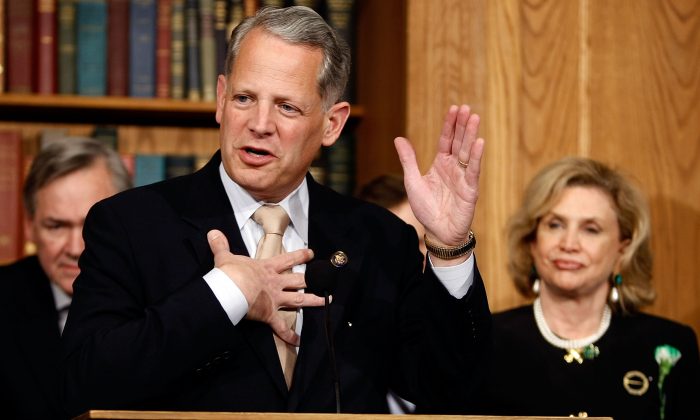 Investment in infrastructure and research, financed by corporate America
By James Grundvig

America has faced the great void of financial ruin before. And time again in history the country invested in research and infrastructure to get back on track.

First, the Erie Canal that linked New York City and the East Coast to the west by water. Next, Abraham Lincoln’s chartering of the Trans-Continental railroad during the middle of the Civil War in 1863. And finally, President Eisenhower’s development of the federal highway system in the 1950s.

According to the centrist Democrat congressman we should take a lesson in history. “I am a history buff. I enjoy reading books. And the one I recommend reading in our trying times is Felix Rohatyn’s ‘Bold Endeavors.’ He was the financial expert who prevented New York City from going bankrupt in 1975.”

Sitting at a private lunch hosted by Scott Livingston, a New York-based financier, Congressman Israel discussed topics from Iran’s nuclear weapons program and the Syrian War, to our crumbling bridges and the government shutdown.

Investors and middle-class families alike are concerned about the government paralysis and the possibility of national default. The latter would be a catastrophe of epic proportions.

Outside of the Federal Reserve Chairman Ben Bernanke’s quantitative easing program, China and Japan have been the biggest bond purchasers of U.S. debt. As a result, China has warned the United States on the dangers of defaulting on its obligations.

According to U.S. Treasury figures released in May, China is the No. 1 foreign owner of U.S. debt at $1.32 trillion, about 8 percent of the total.

The Beltway gridlock with ideological splinter groups entrenched in each party has stymied real productive talks to come up with solutions for our fiscal woes. Rohatyn pointed this out in his timely book, published in 2009 when the stock market hit rock bottom. He called for “bold” and “visionary” thinking by our government to find a way of robust growth.

Infrastructure and Research Are Key

Whether this estimate is off by 10 million or 20 million, new infrastructure will be needed to accommodate more people, while fragile, old systems will need to be maintained and replaced.

Add the network of the connected world and old infrastructure projects of steel (railroad) and concrete (highway) will be complemented with fiber optics “pipe” and the “portal” of smart grids, smarter cities, and virtual communities.

In a separate interview, Waterfront Toronto Project’s CEO John W. Campbell explained that the revitalization of Toronto’s brownfield waterfront began not so much with laying the foundation.

Instead, placing the ultra-high-speed fiber optic pipe with an IBM custom-built portal that will empower future residents to connect to and enjoy the benefits of the virtual community before they move into their residences.

That model is called inclusion. New cities will be built or resurrected around the cloud with infrastructure sprouting out, the way old Europe used to build its urban centers around churches.

During the Q&A session with Israel a question was raised: “What about both? What about infrastructure and research together?”

After all, Toronto was planning to rebuild its waterfront with the high-speed pipe and IBM cloud portal first.

Toronto merely followed Chattanooga’s lead on building North America’s first 100 percent fiber pipe that will deliver “1 Gigabit-per-second Internet speed available to every home and business—over 150,000 of them” to its residence and workforce. And the Scandinavian model of the network community inspired them both.

With a tagline, “Your Gig Is Here,” Chattanooga sits inside the quadrant of bigger, more robust cities of Nashville and Knoxville, Tenn., to the north, and Atlanta, and Birmingham, Ala., to the south.

When “Chattanooga as being the model,” was mentioned, the sharp, articulate, and personable congressman looked at the audience with inquisitive eyes. He scribbled a note on a napkin, nodded, and then said, “We can finance that future. Here’s how.”

Israel qualified that neither the far left nor the far right would appreciate his plan. But since the history of the United States points to the direction of huge government investments in research and infrastructure as the path forward, he said, “There is some $2 trillion of U.S. corporate profits sitting overseas. My Democrat friends want to tax the money, while the Republicans want to give it a tax holiday.”

Neither resolution as a bill would ever get passed in today’s deadlock government.

Israel sat forward and looked around the table as a point of emphasis. “The corporations want only a 5 percent tax rate, while I would like to see 15 percent along the lines of capital gains tax. Somewhere in the middle we will probably agree. But I want to do it with an incentive,” he said.

“We make the deal with the corporations to repatriate their windfall, but do so by investing a portion of that money in U.S. Treasury bills called ‘Build America.’ The bonds would be used for infrastructure repairs and to build projects like Chattanooga.”

Israel sees the ‘Build America’ bill as a triple win for the American people, the three branches of government, and U.S. corporations. The enterprises would “enjoy the benefits of the windfall, while the investment in America’s future on infrastructure projects will put most of the 12 million underemployed and unemployed people back to work.”

If the two parties survive next week’s default on national debt, then this is a bill that should be tabled for a vote with a clear mandate and scope of work. It could also be embraced by the business community and U.S. citizens alike.

It’s about time U.S. corporations invest in America again. Israel has the right medicine for our ailing economy.