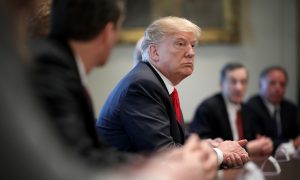 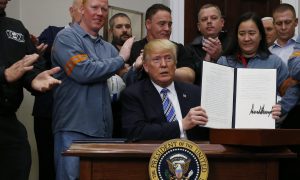 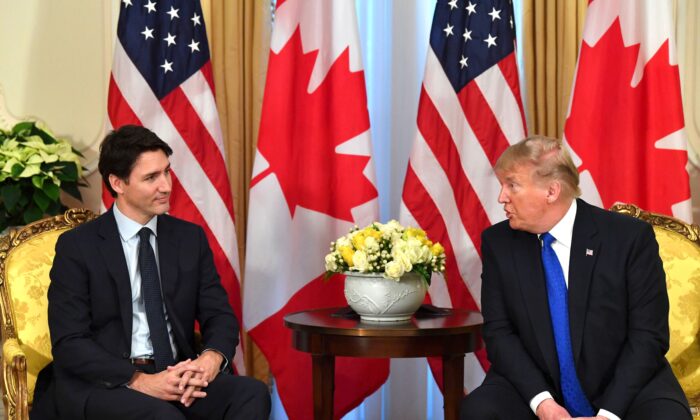 WASHINGTON, Wash.—The United States reversed course Tuesday in its latest tariff dispute with Canada, lifting a 10 percent levy on Canadian-made aluminum just hours before Ottawa was to let fly with a suite of countermeasures.

The tariffs are being lifted retroactive to Sept. 1 because Canadian exports are expected to “normalize” over the remainder of the year, the U.S. Trade Representative’s office said in a statement.

That did not end up happening, but the ministers left that option on the table.

“Canada will not be imposing reciprocal countermeasures on the United States,” Ng told a news conference in Ottawa.

“Let me be clear: Canada has not conceded anything. We fully retain our right to impose our countermeasures if the U.S. administration decides to reimpose its tariffs on Canadian aluminum products, and we are prepared to do so.”

Average monthly imports from Canada are expected to decline by 50 percent from the levels they reached in the first six months of the year, the USTR said.

“Based on these expectations, the United States will resume duty-free treatment of non-alloyed, unwrought aluminum retrospective to Sept. 1, 2020,” and the next four months will be closely monitored.

“If actual shipments exceeded 105 percent of the expected volume for any month during the four-month period, then the United States will impose the 10 percent tariff retroactively on all shipments made in that month.”

Freeland and Ng both flatly rejected any suggestion that Tuesday’s news represented a settlement, nor that Canada had acquiesced to any demands for export quotas.

“This is not a negotiated deal between Canada and the United States,” Freeland said. “We have not agreed to anything.”

Both sides in the dispute had been negotiating for months, and there had been rumblings of a resolution, said Dan Ujczo, a trade lawyer with the Ohio firm Dickinson Wright who specializes in the Canada-U. S. corridor.

A gradual resumption of manufacturing in the U.S., which ground to a halt at the outset of the COVID-19 pandemic, likely helped ease the pressure.

“I think it’s a combination of the threat of countermeasures and the facts on the ground as the purported surge was dropping, based on the economic recovery,” Ujczo said.

Canadian aluminum producers have been complaining for weeks that what the U.S. saw as a “surge” was in fact the unavoidable byproduct of emergency measures.

With automakers forced to idle their production lines, demand for specialty value-added aluminum products from north of the border began drying up in March.

Smelters, unable to simply shut down and ride out the storm, instead shifted to producing the same generic, unwrought metal as producers in the U.S., triggering alarm bells and eliciting the wrath of the USTR.

“The last thing that Canadians and Americans need now in the midst of this pandemic is another trade war,” Freeland said.

“Canada salutes this change in position and is delighted at the prospect of strengthening its trade relationship with the United States.”

U.S. negotiators have long tried to impose quotas on exporters of Canadian metal, an effort that officials on the Canadian side of the table have strenuously opposed.

“I mean, there’s certainly thresholds, but I don’t think these operate as a limit to completely constrain the industry,” he said. “These allow for growth within the industry based on market principles.”

The White House had also been under recent pressure to rethink the tariffs.

The governors of New Hampshire, Maine and Vermont wrote to President Donald Trump last week in hopes of convincing him to stop measures they said would have “negative consequences” for consumers and suppliers in the United States.

“New England and Canada build things together,” they wrote. “The rising costs will add to the challenges already facing most business sectors during these challenging times caused by the COVID-19 pandemic.”

The U.S. imposed the tariffs last month at the request of two American manufacturers, prompting an outcry not only from Canadian producers, but from the bulk of aluminum producers in the U.S. as well.

And prior experience made sure Tuesday’s news elicited as much skepticism as celebration.

“The United States has not unconditionally lifted its tariffs on Canadian aluminum and continues to seek to restrict market-driven trade flows,” said Mark Agnew, the senior director of international policy for the Canadian Chamber of Commerce.

“We call on the United States to fully and without precondition remove the threat that tariffs could be reimposed in the future.”

The federal Liberal government had already issued a list of products it might have targeted for retaliation, including beverage cans, washing machines and golf clubs.

Indeed, Freeland herself acknowledged last month that the very washing-machine plant in Ohio where Trump announced the tariffs would be impacted by Canada’s retaliatory measures.

Asked Tuesday for more details on what products were in Canada’s sights, Freeland demurred: “All the best items on the list,” she grinned.