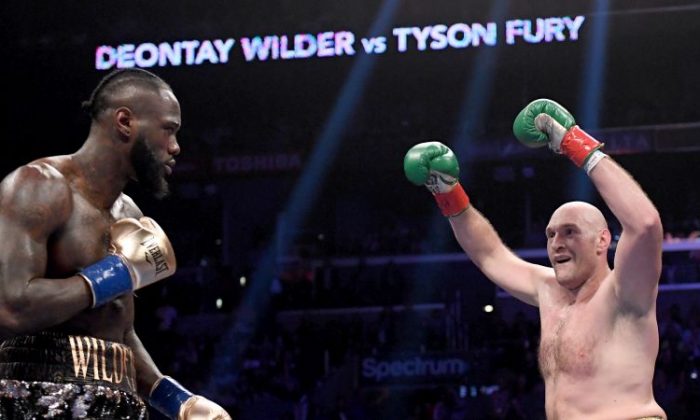 Tyson Fury baits Deontay Wilder in the second round, fighting to a draw during the WBC Heavyweight Champioinship at Staples Center on Dec. 1, 2018 in Los Angeles. (Harry How/Getty Images)
Entertainment News

Tyson Fury, following his Saturday night, Dec. 1, boxing match against Deontay Wilder that ended in a draw, has said that he would donate his $10 million fight purse to help the poor and build houses for homeless people.

Before the fight, Fury told the Irish Mirror that he would donate the entirety of his winnings.

“I’m going to give it to the poor and I’m going to build homes for the homeless,” Fury said.

“I don’t really have much use for it, I’m not interested in becoming a millionaire or a billionaire. I’m a boxer not a businessman and I’ll probably go down the same route as every other boxer … skint at the end of it all. You can’t take it with you so I might as well do something with it and help out people who can’t help themselves,” he said.

Fury wasn’t asked about the pledge following his controversial draw with Wilder. Many believed Fury won the fight, although Wilder knocked his opponent down twice.

Fury added that he doesn’t want his children to live off the millions he’s made as a boxer. “I believe all kids should make their own money in life because if they don’t, they won’t appreciate it,” Fury said.

“It’s easy to spend someone else’s money and the money I’ve earned is practically blood money. My kids have to make their own living and make their own way in life; they won’t be living off my name or reputation because that’s too easy a route,” he explained. “You see many of these rich people’s kids doing nothing because they had it too easy. I never had it easy, I had to work for whatever I got. I was working from very young, everything I wanted in life I had to work for.”

Judge Alejandro Rochin, of Mexico, scored the fight 115-111 for Wilder, Canadian judge Robert Tapper scored it 114-112 for Fury, and British judge Phil Edwards had it 113-113 to make it a draw, ESPN reported. Both fighters are unbeaten.

“I think with the two knockdowns, I definitely won the fight,” Wilder said of the draw. “We poured our hearts out tonight. We’re both warriors, but with those two drops, I think I won the fight.”

“We’re on away soil. I got knocked down twice, but I still believe I won that fight,” Fury explained. “I’m being a total professional here. I went to Germany to fight [Wladimir] Klitschko, and I went to America to fight Deontay Wilder. God bless America. The ‘Gypsy King’ has returned.”

Fury added: “That man is a fearsome puncher, and I was able to avoid that. The world knows I won the fight.”

“I hope I did you all proud after nearly three years out of the ring,” Fury continued. “I was never going to be knocked [out] tonight. I showed good heart to get up. I came here tonight, and I fought my heart out.”

“I came out slow. I rushed my punches. I didn’t sit still. I was too hesitant,” Wilder said. “I started overthrowing the right hand, and I just couldn’t adjust.