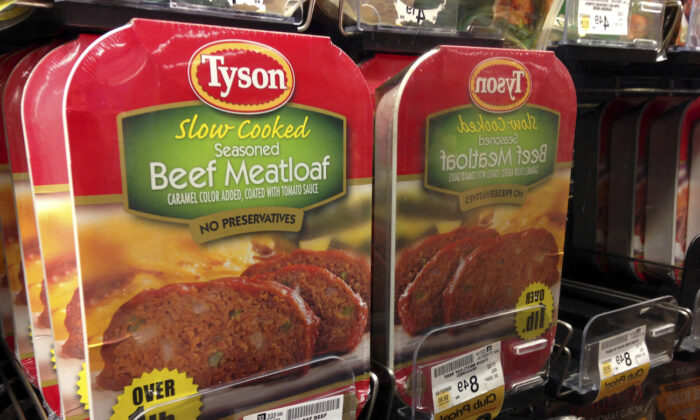 Tyson Foods beef meat loaf for sale at a grocery store in Encinitas, Calif., on May 29, 2014. (Mike Blake/Reuters)
Companies

Tyson Foods, the biggest U.S. producer of processed chicken and beef, reported net income of $1.126 billion in the company’s fiscal first quarter of 2022, more than double the $472 million it reported in the year-ago quarter. The company also reported quarterly net income of $2.87 per share, beating forecasts of around $1.90.

The meatpacking giant said that high consumer prices amid strong demand and supply-side constraints helped the company boost operating income in beef, chicken, and pork. Beef prices jumped by 32 percent in the quarter, with chicken up about 20 percent and pork 13 percent.

“We’re pleased with the results of the first quarter and of the steps that we are taking to improve productivity,” Donnie King, president and CEO of Tyson Foods, said in a statement. “Our performance reflects the resilience of our multi-protein portfolio even with continued volatility in the marketplace.”

U.S. meatpackers have benefited from higher consumer prices that offset higher transportation and labor costs. Seeking to attract and retain workers amid the labor crunch, Tyson announced in December that it would pay $50 million in year-end bonuses to frontline and hourly meatpacking employees, while one Tyson plant started offering 36 hours’ worth of payment for 27 hours’ work.

It comes amid a broader inflationary trend that has seen consumer prices vault to levels not seen in decades, with upward pressure on wages, too.

In January, wages among hourly workers in the United States rose above expectations and at their highest pace on record, with the exception of a sharp, one-month increase in wages in April 2020. That’s when millions of relatively low-paid workers lost their jobs while their relatively high-paid counterparts remained employed, with the structural shift in employment composition leading to a boost in average wages.

Average hourly wages in January rose by an annual 5.7 percent, putting economists on alert for the stirrings of a possible wage-price spiral as concerns about the persistence of underlying inflationary pressures shift from supply-side bottlenecks to worker demands for higher pay.