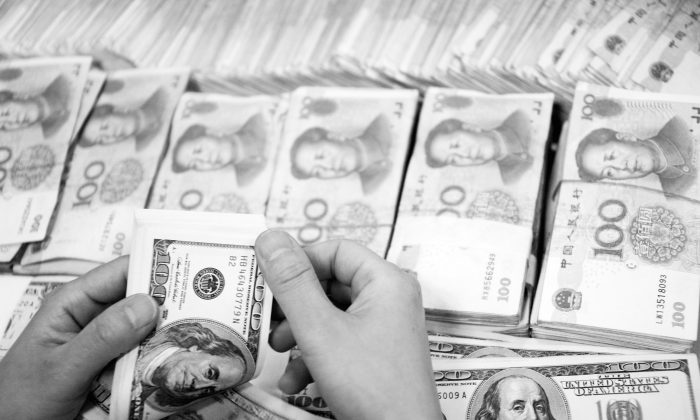 US$19.6 million cash and 27 Kg gold were seized from the home of a minor official who managed a state water company. The official is under investigation for corruption, China's state-run Xinhua News Agency reported. (ChinaFotoPress/Getty Images)
China

Tyrant of the Water Works Taken Down in China

This is a case of a minor official and major corruption. A deputy department-level Communist Party official under investigation for taking bribes and embezzling public funds was found to own 68 houses. Police seized 120 million yuan (US$19.6 million) cash and 27 Kg gold (approximately 60 pounds, worth US$1.2 million at current prices) in his home, according to a state news report.

Ma Chaoqun, a deputy researcher at the Urban Administration Bureau in Qinhuangdao City of northern China’s Hebei Province, was the general manager of a major state-run water company in the city before 2012.

Ma’s official level is quite minor, but the water company is in charge of the water supply for significant tourist areas in the coastal city where central Party leaders host a conference in the summer. In addition, many domestic and international tourists visit the place.

Abusing his position’s power, Ma acted like a tyrant in the water system in Hebei, according to Southern Metropolis Daily. He was taken away by anti-corruption investigators in Qinhuangdao on Feb. 13. An anonymous staff member at the water company said Ma has a triad background and was escorted away by special police, the report says.

Ma is notorious for being “greedy and despotic,” according to state-run Xinhua news. “He requests money from everywhere,” an anonymous local official close to Ma told Xinhua. “If you don’t pay Ma, he wouldn’t supply water for you. If you pay too little, he would reduce your water supply.”

Ma’s corruption case is just the tip of the iceberg. From January to October, the Hebei Province anti-corruption task force has filed 14,808 official cases and investigated 238 county-level and above officials for corruption, according to Xinhua.

Such a minor official as Ma taking such a large amount of money from common people has caused many Chinese to express their disappointment and loss of trust in communist officials on the internet. “He is just a representative of millions of Communist Party members. Don’t be too surprised everyone!” posted internet user “Big Tao, big sky, big person” on a microblog.

Another netizen with the name “Ha beer club” wrote: “How many ‘miracles’ have the communist cadres shown us in the past years! We cowardly Chinese are super tolerant!”