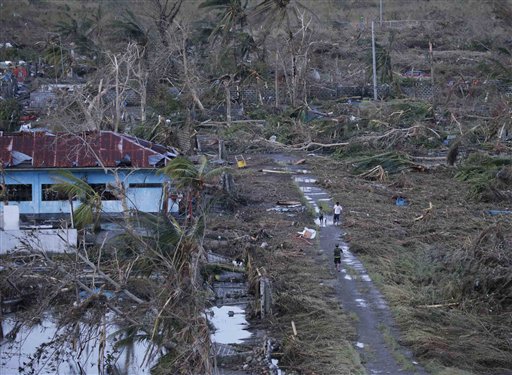 Residents go on their daily business Saturday, Nov. 9, 2013 following a powerful typhoon that hit Tacloban city, in Leyte province, central Philippines. The central Philippine city of Tacloban was in ruins Saturday, a day after being ravaged by Typhoon Haiyan, one of the strongest typhoons on record, as horrified residents spoke of storm surges as high as trees and authorities said they were expecting a "very high number of fatalities." (AP Photo/Bullit Marquez)
Asia & Pacific

Typhoon Yolanda, or Haiyan, could have killed at least 10,000 people in the central Philippines, said a senior government official in an update today.

A senior regional police official, Elmer Soria, told GMA News: “We had a meeting last night with the governor and based on the government’s estimates, initially there are 10,000 casualties (dead).” Also, Tacloban city administrator Tecson Lim told The Associated Press that the death toll in his city alone “could go up to 10,000.”

Josh Morgerman, a storm chaser who was in Talcoban when the storm hit, described the devastation and said the situation was “desperate.”

Tacloban City, he wrote on Facebook, “is a horrid landscape of smashed buildings and completely defoliated trees, with widespread looting and unclaimed bodies decaying in the open air. The typhoon moved fast and didn’t last long– only a few hours– but it struck the city with absolutely terrifying ferocity.”

“At the height of the storm, as the wind rose to a scream, as windows exploded and as our solid-concrete downtown hotel trembled from the impact of flying debris, as pictures blew off the walls and as children became hysterical, a tremendous storm surge swept the entire downtown.”

He continued: “The city has no communication with the outside world. The hospitals are overflowing with the critically injured. The surrounding communities are mowed down. After a bleak night in a hot, pitch-black, trashed hotel, James, Mark, and I managed to get out of the city on a military chopper and get to Cebu via a C-130– sitting next to corpses in body bags. Meteorologically, Super Typhoon HAIYAN was fascinating; from a human-interest standpoint, it was utterly ghastly. It’s been difficult to process.”

Soria told ABS-CBN that the typhoon likely destroyed between 70 and 80 percent of the area in its path through Leyte Province. The majority of the deaths were likely caused by storm surge and collapsed buildings.

“We had a meeting last night with the governor and the other officials. The governor said, based on their estimate, 10,000 died,” he told Reuters. “The devastation is so big.”

Some residents described the surge as appearing like a tsunami.

Officials in Samar Province told AP that 300 people were killed in the town of Basey alone.

Interior Secretary Manuel Roxas told ABS that he surveyed the damage in Leyte following the storm, saying that it was catastrophic. “From a helicopter, you can see the extent of devastation. From the shore and moving a kilometer inland, there are no structures standing. It was like a tsunami,” he said.

Talcoban city officials said they were struggling to retrieve bodies or get supplies to survivors.

“There is looting in the malls and large supermarkets. They are taking everything even appliances like TV sets, these will be traded later on for food,” Lim said. “We don’t have enough manpower. We have 2,000 employees but only about 100 are reporting for work. Everyone is attending to their families.”

Other areas in the eastern Visayas are cut off from the rest of the country.

And Guiuan and Giporlos, which were the first towns to be hit by the typhoon, are said to be completely destroyed.

The Provincial Disaster Risk Reduction Management Council (PDRRMC) said that some 9,248 homes were destroyed in Aklan Province, while 18,387 homes were partially damaged.