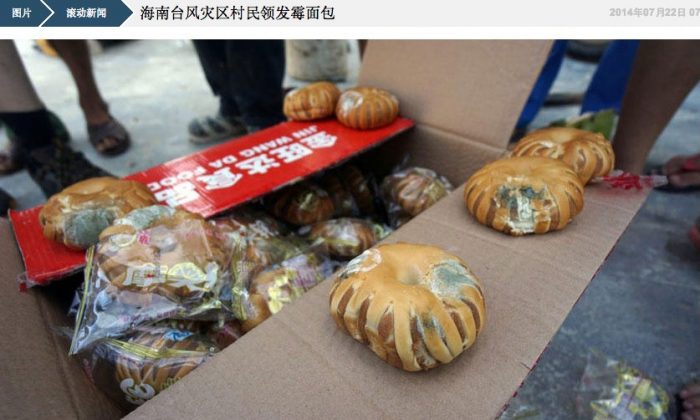 Residents in a village of Weichang City in southern China's Hainan Province received a box of moldy bread for disaster relief on July 20, 2014, after Typhoon Rammasun hit China on July 18. State-run media report that victims of the typhoon received moldy bread and winter quilts from the local governments and the Red Cross. (Screenshot/Caixin.com)
China

Typhoon Victims in China Given Moldy Bread and Winter Quilts

The worst typhoon to hit China in 41 years made landfall on July 18, leaving millions in urgent need of water, food, and tents. The relief sent by local governments and the Red Cross included large amounts of moldy bread and winter quilts.

According to official statistics, Typhoon Rammasun has killed 46 people in China, and 25 people are still missing. The storm and mudslides destroyed tens of thousands of homes, damaged farm land, roads, and ports, and cut off electricity and water supplies in many cities in southern China’s Hainan, Guangdong, Guangxi, and Yunnan Provinces. 9.97 million people have been affected, and there has been 33.65 billion yuan ($5.4 billion) direct financial loss.

On July 20, residents in Weichang City of Hainan Province finally received relief supplies from the local government including bottled water and bread, but much of the bread was moldy and not edible, according to the state-run Jiefang Daily. The residents were starved and had for two days relied on well water due to the loss of electricity and normal water supplies.

A volunteer helping in a village of Weichang City told the daily paper that two boxes of bread arrived, and one of the boxes was quickly emptied by hungry villagers, but no one even touched the other one. “Most of the bread in the other box was molded and totally not edible,” the volunteer said, because many of the packages had holes.

Public information shows the price of the bread is very cheap at only one yuan (16 cents) per package, but many online customer reviews show problems with the packaging, the report said.

The Department of Civil Affairs in Hainan Province confirmed problems with moldy bread on July 21 in a press conference, saying that 290 boxes of bread out of 1127 boxes of relief supplies were found moldy after inspection.

The public was also outraged at the Red Cross in Guangdong Province for sending 2000 winter cotton quilts and 5000 jackets to southern Chinese cities in the disaster regions on July 20. The temperature in the stricken areas is over 90 degrees Fahrenheit, and even the lowest temperature at night is around 80 degrees Fahrenheit.

Local officials in the hardest hit Zhenjiang City of Guangdong told the state-run Yangcheng Evening News that residents there are in urgent need of summer sleeping mats and blankets but not winter quilts. Many netizens also criticized the Red Cross for wasting money and manpower and not being considerate of the victims.

Yang Xusheng, the deputy director in the Red Cross’s Rescue Department told state-run Beijing news outlets: “It’s the rescue tradition in our country to send out cotton quilts. One can sleep on or under it. It has a wide range of uses.”

Netizens were not convinced by the Red Cross’s explanation, and the warm quilts and moldy bread figured in complaints on the Internet.

“Where did our donations go for every disaster rescue? Did the money go into officials’ pockets?” wrote netizen “Pashang Wudingde Sunny” on Weibo, a twitter-like platform in China.

The embezzlement of donations for disaster relief has often been exposed by Chinese media.

For instance, news reports this April revealed that a town hall in Mianyang City of Sichuan Province kept three office rooms of relief supplies that were supposed to be sent out to victims of the earthquake in Sichuan six years ago in 2008. A lot of rice, bread, instant noodles, bottled water, and clothes were there and smelled “extremely stinky,” according to the reports.

The reputation of China Red Cross has taken hits from recent corruption scandals.

In 2011, the 20 year-old Guo Meimei flaunted her wealth in microblog posts while claiming to be a Red Cross official. Also in 2011, Ruan Heng, the executive vice president of Red Cross in Kunming of Yunnan Province, was tried for embezzlement of tens of thousands of yuan in public funds and donations (10,000 yuan equals US$1,600).