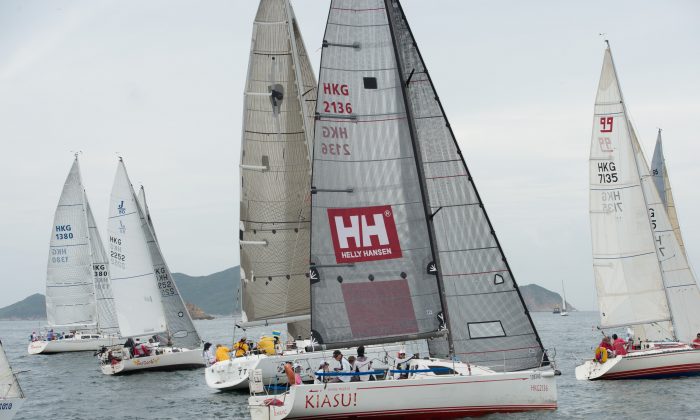 With the maximum 2-discards now in place following the completion of 8-races, it is now a straight race to the finish.

In IRC Division-A, “Zannekin”, put in a brilliant performance in Race-8 to take line honours 12 minutes ahead of “Vineta”, and is holding 1st place in the series with 8-points. “Ambush” is in 2nd place on 18-points, “Signal 8” is lying 3rd on 20-points with “FreeFire” and “Straight Up” just a few points behind on 23 and 24-points respectively. “Zannekin” is firm favourite to win the series but there should be a good final race to decide 2nd and 3rd places.

In IRC Division-B, “Lighthorse” leads the series also with 8-points, but in this division 2nd place “Sea Wolf” is just 2-points back on 10-points. Although “Stella” came 1st in last Sunday’s race, “Lighthorse” was second and “Sea Wolf” 3rd, so “Stella” on 20-points made little impression on the series position. The final placing for 1st and 2nd position are still up for grabs as is the 3rd place series finish between “Stella”, “Mojito” (last year’s winner of this IRC-B ) on 21-points and “Blackjack” on 24-points. Interestingly, “Mojito” finished ahead of “Stella” in each of the two geometric races earlier in the series, so this is expected to be a contest to watch.

In IRC Division-C, “Dexter” II chalked up another win to maintain her perfect performance and is currently on 6-points, 9-points ahead of “Gearbox” (15); “Gambit” is in 3rd place on 21-points. “Lady Butterfly” and “Moll” just a few points further back will be eager to fight for the 3rd place spot.

Steve Bourne in “Merlin” leads the Sportsboats Division with 6-points, some way ahead of 2nd placed Sidewinder on 14-points. “Brace Brace Brace” and “Black Magic” are next but are both on 38-points contesting 3rd place.

The competition for the top spots are close in the HKPN Divisions, where “Getafix” and “Kiasu” are closely matched at 14 and 15-points respectively at the head of HKPN Division-A. “Scintilla” on 21-points and “DEA II” on 24-points are the next two in line.

In HKPN Division-B, “Pepper & Salt” leads on 15-points, “Windseeker” is lying second on 18-points and “Eclipse” is in 3rd place on 23-points. “Scrumpy” came first in last Sunday’s race but is down at 7th place on 38-points for the series.