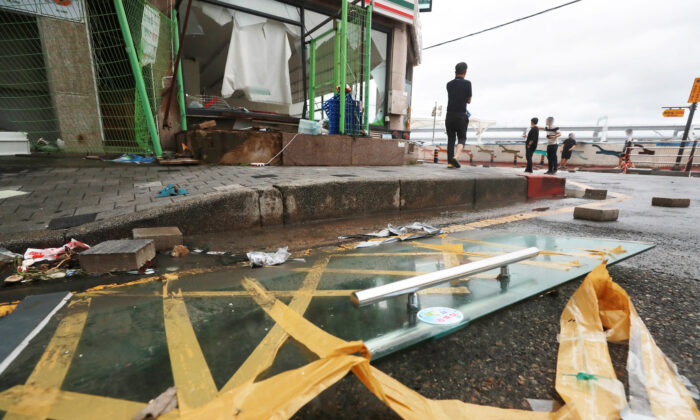 SEOUL, South Korea—The most powerful typhoon to hit South Korea in years battered its southern region Tuesday, dumping a meter (3 feet) of rain, destroying roads and felling power lines, leaving tens of thousands of homes without electricity before weakening at sea. Two people died, and some of the missing were stuck in a submerged basement parking lot.

Typhoon Hinnamnor grazed the resort island of Jeju and hit the mainland near the port city of Busan before blowing into the waters between the Korean Peninsula and Japan.

Hinnamnor’s winds have weakened to 115 kilometers (71 miles) per hour and the typhoon was expected to be downgraded to a tropical cyclone by night as it moves northeast between Russia and the northern Japanese island of Hokkaido, South Korea’s weather agency said.

The damage seemed most severe in the southern city of Pohang, where one person was found dead and at least nine others were missing after the storm submerged roads and buildings, triggered landslides and flooded a shopping mall.

Storm-damaged cars—their windows smashed or trunks opens—were scattered on roads like garbage, while an entire two-story pool villa was uprooted from the ground and swept away in flash floods. Troops were deployed to assist with rescue and restoration efforts, moving in armored vehicles rolling through streets that turned into chocolate-colored rivers.

Hinnamnor made impact just weeks after heavy rains in the region around the capital Seoul caused flooding that killed at least 14 people.

The storm dumped more than 105 centimeters (41 inches) of rain in central Jeju since Sunday, where winds peaked at 155 kph (96 mph). Southern and eastern mainland regions also had damages—knocked off signboards and roofing, toppled trees, traffic signs and electricity poles, and submerged roads and parking lots.

A woman in her 70s died in Pohang after being swept away in flash floods, while another woman in her 80s died in nearby Gyeongju after her home was buried in a landslide. The nine people missing in Pohang include eight stuck in a submerged basement parking lot. In the nearby city of Ulsan, a 25-year-old man was unaccounted after falling into a rain-swollen stream, according to the Ministry of the Interior and Safety.

Also in Pohang, firefighters extinguished flames that damaged at least three facilities at a major steel plant operated by POSCO. A presidential official, who spoke on condition of anonymity during a background briefing, said officials were investigating the cause of the fires.

Local fire officials said the flames destroyed a building housing electricity equipment and damaged a separate office building and a cokes factory before being put out.

The Safety Ministry said about 500 among 3,400 people who had been forced to evacuate returned home as of Tuesday afternoon. Nearly 80 homes and buildings were flooded or destroyed, and hundreds of roads, bridges and facilities were damaged.

More than 600 schools were closed or converted to online classes. Workers had managed to restore electricity to 30,006 of the 66,341 households that lost power as of Tuesday afternoon.