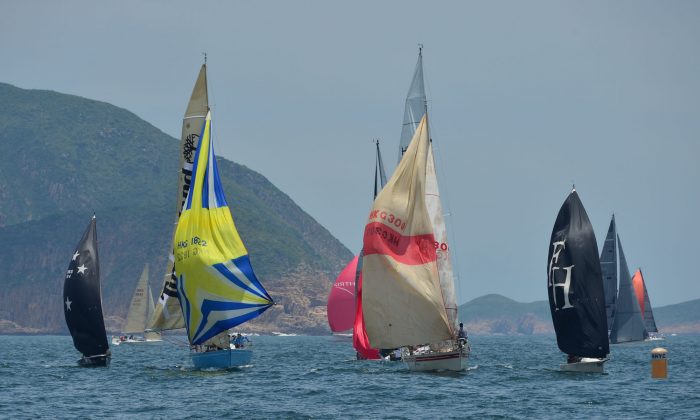 Boats close in on the Leeward Mark during the first geometric race on Day-4 of the Hebe Haven Quest Yachting Typhoon Series 2014 on Sunday July 20, 2014. (Bill Cox/Epoch Times)
Hong Kong

HONG KONG—Typhoon Rammasun, deadly in Vietnam and Southern China, slipped safely past the south of Hong Kong last weekend more easily than expected and it was sunshine as usual for the Typhoon Series races at Hebe Haven last Sunday July 20. Although the sea was a little choppy the remnants of Rammasun could only raise a 5 knot breeze East of Trio Island for the two geometric races organized for Day-4 of the Series. The wind did pick up a little during the afternoon but racing conditions were still quite mild.

Picking the spot for the races was a little tricky and Race Officer Lesley Anderson had to search somewhat to find a suitable course delaying the start by half an hour. But a location for the Windward–Leeward course was finally decided to run upwind from the East of Trio Island in an east-northeast direction. Markers were positioned and at 11.55am the IRC-A and -B boats set off on three windward-leeward laps finishing at the Leeward Mark.

The remaining categories IRC-C and -D and Sports Boats completed the same 3-lap course while the HKPN boats used the same markers but did two laps instead of three.

IRC-A
“Jelik” showed her face and completed most of the first race well in front of the rest, but then retired saying they had someone on board that had to catch a flight. From then on “FreeFire” took up the cudgel and won Line Honours in the first IRC-A race, but she was pushed into 4th place by “EFG Mandrake”, “Signal 8” and “Vineta” on corrected time.

In the second race (Race 6) “FreeFire” again took Line Honours and also 2nd position on corrected time behind “Mandrake”. “Signal 8” was 3rd and “Ambush: 4th. “Mandrake” leads the series with 4 successive wins (4-Points), “Signal 8” is 2nd on 9-Points and “FreeFire” is 3rd on 17-Points.

IRC-B
“Stella”, “Mojito” and “Orient Express” took the first three places respectively in the IRC-B category in both of the races of the day but 4th and 5th place finishes by “Outrageous” and “Blackjack” still keep them in equal 3rd place overall in the Series after the completion of 4-Races (Races 2 and 3 were cancelled for lack of wind). “Mojito” currently leads the Series standings on 10-Points with “Stella” just a point behind on 11-Points.

IRC-C
“Dexter II”, “Vixen”, “Whiskey Jack”, “Gearbox” and “Talkinghead” are all performing well in the IRC-C category and again showed that they are the lead boats to watch in this Division. “Dexter II” and “Vixen” both picked up winner and Line Honours pennants and “Talkinghead” and “Gearbox” both collected 2nd and 3rd place prizes for these two races.

In the IRC-C Series standings “Dexter II” is leading on 9-Points, “Vixen” is lying 2nd on 11-Points, “Gearbox” is 3rd on 14-Points. Although “Whiskey Jack”, “Talkinghead” and “Gambit” are currently a few points off the pace they have some high scores that they might discard as the series progresses to move them to a higher position.

IRC-D
At the cruiser end of the IRC division Impala’s “Taxi” and “Moll” were again in contention with “Taxi” picking up two 2nd place finishes and “Moll” a 3rd place, but the winners were “Spaceship” in Race-5 and “Calamansi” in Race-6. “St Happens” maintained steady progress with 3rd and 4th place finishes in the two races to be equal first in the series standings together with “Calamansi” on 9-Points. “Taxi” is just behind on 10-Points. “Moll” is a further 10-Points back mainly due to missing Race-4.

Sport Boats
Sports Boats are always exciting to watch and this week was no exception. There was just 15 seconds between winner “Merlin” and 2nd placed “Black Magic” in Race-5 with “Sidewinder” coming home a minute later. The race between “Merlin” and “Black Magic” might have been even closer had it not been for some cross traffic in the name of “White Dragon” slowing “Black Magic” just before the finish. In Race-6 it was “Fly By Wire” that performed best with “Merlin” holding 2nd place, “Black Magic” was 3rd and “Good Vibrations” 4th.

“Merlin” and “Black Magic” are tied on 9-Points in the series standings with “Sidewinder” 3rd on 12 points. But “Fly By Wire” missed the first two races, but is now producing good performances and if 8 or more races are completed in the Series which will allow 2-discards she could well compete for a medal position.

HKPN
A big field of 23 boats took part in the HKPN races giving hard competition and still leaving chances for many contenders in the Series standings. After 4-Races although “Kiasu” is leading on 17-Points, “Windseeker”, “Jive”, “Jazz” and “JeNa PaBe” are all only a few points behind. “Kiasu” came 2nd in each of the two races to push her nose into the series lead, but the other contenders were all had good results keeping them well in contention. With a possible further 5-Races to compete, the HKPN series winner position is still wide open.

Next Race
Races-6 and -7 of the Hebe Haven Summer Saturday Series are scheduled for this coming Saturday July 26 with two geometric races inside of Port Shelter.