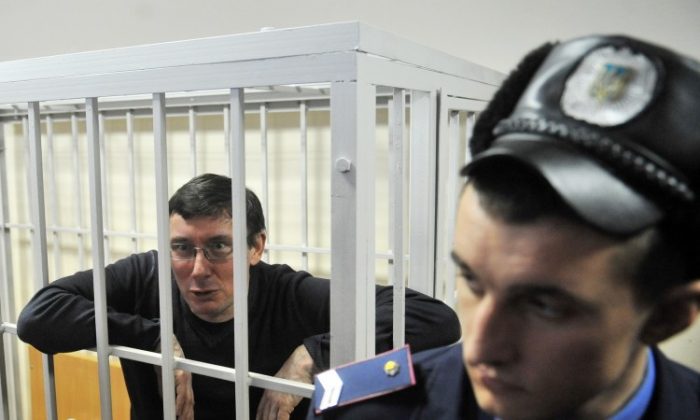 Former Ukrainian Interior Minister Yuriy Lutsenko , sits in a cage inside the courtroom during his verdict hearing on Feb 27. (Sergei Supinsky/AFP/Getty Images)
Europe

KYIV, Ukraine—A Kyiv court on Monday found former Ukraine Interior Minister Yuriy Lutsenko guilty of embezzlement and abuse of office. He was sentenced to four years in jail, which includes the time he spent during his interim custody since December 2010.

Lutsenko, 47, is a one of the opposition leaders in Ukraine and a former member of Ukraine’s government under former Prime Minister Yulia Tymoshenko, who was sentenced last October to seven years in jail for abuse of office over a natural gas imports contract signed with Russia in January 2009.

The main charges against Lutsenko include his giving illegal bonuses and perks to his driver at the expense of the state; abusing his authority by spending some $37,500 in state budget money to celebrate Police Day in 2008 and 2009; exceeding his authority by arranging for the allocation of a one-room apartment for his driver, Leonid Prystupliuk, and illegally promoting the driver to qualify him for a larger pension, according to Kyiv Post.

Igor Fomin, a lawyer for Lutsenko, has repeatedly stated that prosecutors have intimidated and harassed all witnesses, and that many witnesses have given positive testimonies in favor of Lutsenko.

“Everybody understands that this is a political trial, not a judicial one,” Lutsenko told reporters from a metal cage in the courtroom, as Judge Serhiy Vovk read out the verdict.

“I do not need people to take pity on me. I do not ask anything, even from this court. Anyway, I will survive no matter how many years of sentencing I have been given,” he said, according to his People’s Self-defense Party’s website.

“Prosecutors accused me of not repenting but I do not repent because I do not see any crime I have committed,” he pointed out.

The court ruling also authorized the state to confiscate Lutsenko’s personal property and deny him access to government positions for the next three years. He is also required to pay the state over $75,000 in damages.

Experts say that the Ukrainian authorities managed to kick out political rivals before local and parliamentary elections and that Kyiv is continuing to complicate its relationship with the West.

“Yuriy Lutsenko’s sentencing is a further step to establish an authoritarian regime in the country, with courts helping to clean up the political landscape,” said Igor Zdanov, an expert with think tank, Open Politics.

The sentencing of Tymoshenko and Lutsenko has recently cooled relationships between Kyiv and the European Union, preventing a political and economic association agreement from being signed.

The United States and Europe site political motivation for the sentencing and demand that all former government officials be released and allowed to take part in future elections.

The Council of Europe adopted a strong resolution in January condemning political persecution in Ukraine and threatened to impose sanctions if Kyiv does not meet its requirements.

Ukrainian President Viktor Yanukovych dismisses any accusations that he has initiated criminal investigations against the former officials. He referred the Tymoshenko case to the Ukraine Parliament, which has twice failed to decriminalize a criminal code article under which Tymoshenko was sentenced.

Last week, he said that he could free Tymoshenko if she would ask the state for amnesty after the conclusion of all trials and appeal hearings. However, Tymoshenko’s supporters say that she would never ask for a pardon, as she is not guilty.

Tymoshenko is also the subject of several ongoing criminal investigations including improper use of public funds and tax evasion. Her husband, Alexander, asked Czech authorities to grant him political asylum last December, after facing intense pressure from Kyiv officials.