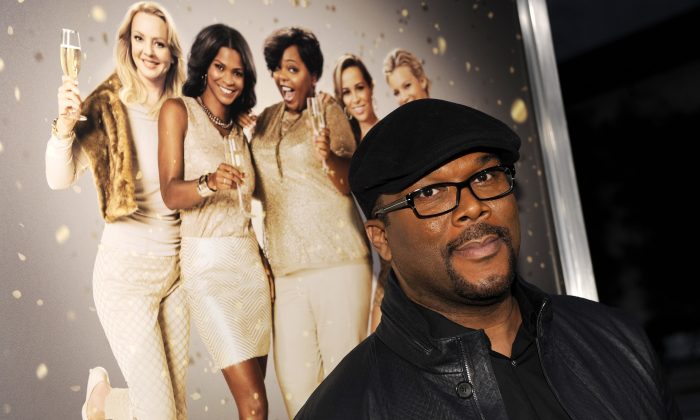 Tyler Perry Pays Off $434,000 in Layaway Items at Atlanta-Area Walmarts

Tyler Perry, the actor, and comedian, reportedly paid off $434,000 in layaway items at metropolitan Atlanta Walmarts, according to reports.

The 49-year-old said he trying to make the gift anonymous, but posted on Twitter: “I was trying to do this anonymously but oh well!!!”

According to TMZ and the Atlanta Journal-Constitution, he paid off $434,000 in layaways.

I was trying to do this anonymously but oh well!!! pic.twitter.com/T0dhRHyU66

A Walmart manager at the Douglasville location said she’s never seen someone pay off the entire system of layaways.

“I was shocked,” said the manager, named Shameka. “It shows that we know there’s still good people in the world.”

All the customers have to do to collect their items and pay a penny before picking it up.

“So Merry Christmas to everybody,” he said. “You’ve got to go into the Walmart, pay a penny, one penny, and you get your layaway.”

Perry explained his motivation behind the move.

“I know it’s hard times, a lot of people are struggling, I’m just really, really grateful to be able to be in a position to do this,” he said. “So God bless you. Go get your stuff! Merry Christmas!”

“Let’s help these people begin to heal and rebuild,” Aaron Rodgers said in a Twitter video while wearing a “Butte Strong” sweatshirt, referring to fire-ravaged Butte County. Several dozen people were killed in the fire and thousands of homes were destroyed last month.

In a more extreme example, Hong Kong actor Chow Yun-Fat, best known for “Crouching Tiger, Hidden Dragon,” said he would give his entire $700 million fortune away to charity, according to The Telegraph.

“The money’s not mine,” he said, adding his wish is “to be a happy and normal person.”

“The hardest thing in life is not about how much money you earn, but how to keep a peaceful mindset and live the rest of your life in a simple and carefree manner,” he said, according to People magazine.

He claimed to wear discount clothes and spends only around $100 each month on himself. He’s also using the same Nokia phone for the past 17 years until getting a smartphone two years ago because his Nokia stopped working.

“I don’t wear clothes for other people,” he added.

“As long as I think it’s comfortable, then it’s good enough for me.”

Perry to Appear in ‘Vice’

Perry will appear as former general and former Secretary of State Colin Powell in “Vice,” a film primarily about former Vice President Dick Cheney. Perry reportedly called Powell to get his approval to play him in the film.

“Only Tyler Perry could just be like, ‘I’m calling Colin Powell.’ I mean, that just cracked me up right away,” director Adam McKay said. “The whole idea of Tyler Perry, I was told the idea, and then he came by my office, and I have never met anyone with more presence in my entire life. Like, the guy has gravitas, and instantly I was like, ‘Oh yeah, he’s Colin Powell.’ So yeah, he talked to Powell.”

“He and Mr. Perry had a nice conversation and even exchanged copies of their recent books and General Powell offered his services to Mr. Perry, if he needed any or had any questions,” Powell’s spokesperson said to Vulture.

“Tyler’s really, really smart. He gets it. He sees the big picture,” McKay said of the talk. “I told him, ‘You know, this isn’t one of Powell’s best stories from his life,’ and Tyler was like, ‘I told him that.’ And to Powell’s credit, he acknowledged that, as well … But ultimately—to Powell’s credit, I guess—that was it. It was a quick exchange.”