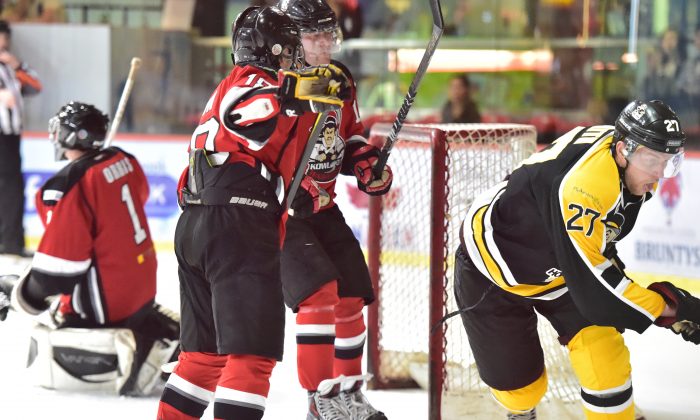 Brad Smith (No.27) of Hong Kong Tycoons forces in his 3rd goal to take his team 4-2 into the lead against Kowloon Warriors in the CIHL match at Mega Ice on Saturday Nov. 8, 2014. (Bill Cox/Epoch Times)
International

HONG KONG—It was a mixed night for Michael Kwist playing for the Macau Aces against the South China Sharks in the CIHL at Mega Ice last Saturday Nov. 8, with a hat-trick of goals and 4-sin bin offenses. But Kwist’s contribution plus additional goals by Daren Winia and Keith Tsang were sufficient to claim the match. The game was level terms with 2-minutes of play remaining with the score at 3-3; a goal by Kwist put Aces ahead sending Sharks into attack mode, but Sharks failed to pull back the deficit and Tsang cashed in with an open goal opportunity for Aces to make the final score 5-3 to Aces.

Tycoons vs Warriors
The second match of the evening between Hong Kong Tycoons and Kowloon Warriors was a real hum-dinger. After 3-goals in the first 7-minutes by the Tycoons it looked like they were going to run away with the match. But this was not so, Michael Yoshino of Warriors pulled a goal back on 8-minutes to end the first session 3-1 to Tycoons.

With alternate goals by Warriors and Tycoons the score progressed to 5-3 to Tycoons after 6-minutes of the second stanza with Tycoons still firmly in control, but two further goals by Warriors, Jasper Tsang and Greg Smyth leveled the score to 5-5 at the break.

Brad Smith who had already scored three times earlier in the game put Tycoons into the lead on 6-5 just 38 seconds into the 3rd session, but two strikes by Eric McKenna for Warriors edged them into the lead 7-6 for the first time in the match. But it was Kory Falite of Tycoons assisted by Don Ho, Brad Smith and Anthony Devolz that scored twice in the final minutes to secure the win.

Standings
Hong Kong Tycoons lead the standing on 8-points, Macau Aces are second on 6-points, South China Sharks have 4-points and Kowloon Warriors are on 3-points.