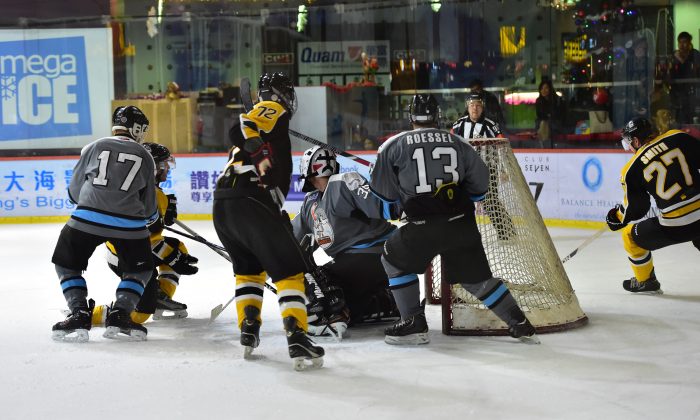 Predator Brad Smith for the Hong Kong Tycoons takes the puck around the net to find a way into goal during their CIHL Match against South China Sharks at Mega Ice on Saturday Dec 13. (Bill Cox/Epoch Times)
HK Ice Hockey

HONG KONG—Hong Kong Tycoons and Macau Aces produced superior performances to consolidate their positions at the top of the Standings going into the year-end break in the 2014/15 CIHL league. After 9-rounds of the 14-round schedule, Tycoons are leading with 12-points, Aces have 10-points, South China Sharks are on 8-points and Kowloon Warriors bring up the rear on 7-points. Restarting on Jan. 10, 2015 the five remaining rounds go through to Feb. 7 and will be followed by up to 3-Semi-final rounds, leading to a finals night on Mar. 15.

Tycoons vs Shark
The Hong Kong Tycoons were back on song last Saturday Dec. 13 when they defeated South China Sharks 6-3 with 3-Star performances by goalie King Ho, and the premier attacker combination of Brad Smith and Kory Falite. Smith and Falite turned on the style in a thoroughly entertaining match. After tying the first session 2-2 with goals by Jordan So and Bernard Fung for the Sharks, and by Jonathan Szychta and Jim Fanstone for the Tycoons, the Tycoons pushed ahead with three goals in the second period with scores by Falite, Szychta and Smith. Although Tycoons were penalized with a rash of 5-sin-bin offenses in the final stanza they still maintained their composure with Falite notching up another goal whilst restricting the Sharks to just one Julien Jorand strike, giving Tycoons a 6-3 result.

Aces vs Warriors
Warriors missing three of their top players Jake McDonnell, Andy Ramsay and Jasen Awalt from their line-up struggled in attack and defense and were a shadow of the team that won against the Tycoons the week before. Although Warriors made forages up field with Greg Smyth, Eric McKenna and Michael Yoshino taking the lead, they were no match for a well-organised Macau Aces squad. Jeff Ceccacci with strong defending and distribution skills cut out many of the Warriors attacks, and assisted up front when the game permitted, beefing up the usual prominent forwards of Darren Winia, Whitney Olsen and Michael Mackie-Kwist. Ceccacci also scored 2-goals of his own.

Aces were 4-goals to the good at the end of Period-1 and although Eric McKenna hit two early goals in Period 2 for the Warriors and added a third goal later in the period, Aces extended their lead to 9-4 at the ice-cleaning break.

Aces added another 4 goals in the final stanza to sweep the Warriors aside with a final score of 13-5. Scorers for the Aces were Whitney Olsen (4), Mackie-Kwist, Ryan Wong, Darren Winia, Jeff Ceccacci (2-goals each) and Yannick Wong scored one. McKenna finished with 4-goals for the Warriors assisted by Michael Yoshino. Sean Tyrrell scored the other Warriors’ goal.

Loron Orris in the Warriors goal had a torrid time facing 52 attacks and although he made 39 saves he was 13 goals in the red, while his Aces counterpart at the other end had a relatively relaxing evening facing just 28 goal attacks and making 23 saves.