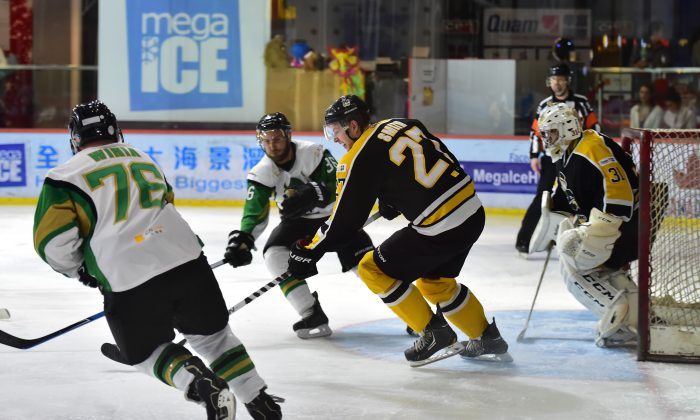 Hong Kong Tycoons’ Brad Smith back defending against an attack by Macau Aces in their 2nd best-of-three CIHL semi-final at Mega Ice on Saturday Feb 28. Tycoons edged a tight match 3-2 with an overtime goal to move into the Final to be played on March 14, 2015. (Bill Cox/Epoch Times)
HK Ice Hockey

Hong Kong Tycoons and Kowloon Warriors both won their 2nd Best-of-Three Semi-final matches on Saturday Feb 28 to take them into the Final of the playoffs at Mega Ice on March 14. Both matches were played with the added intensity of cup ties and had spectators on the tips of their seats – end to end hockey fierce tackles and a high sense of urgency was the formula of the day.

Warriors vs Sharks
Warriors who were one game up going into this second semi-final tie had a great start to the evening. After a tense first 5-minutes, Warriors broke away from an attack on their own goal by Sharks’ Jordan So and Jamie Stark, the puck was fed up ice for Gregory Smyth to combine with Paul Chai and Eric McKenna to put Warriors into the lead.

Jasper Tang doubled the Warriors lead with a strike in the 9th minute to take Warriors into a 2-0 lead at the end of period-1.

Jordan So, sin binned for 2-minutes in period-1, hit back in session-2 with a score in the 5th minute to reduce the deficit to a single goal, but although making many more attacks, goalie, Jasen Awalt repelled all of their other scoring attempts.

McKenna assisted by Smyth and Devin Welsh made it 3-1 to Warriors 3-minutes into the final session and they held on under intense pressure to win the semi-final, despite having two players sidelined for part of the final period. Goalie Awalt was a true man of the match staving off 37 attacks on goal. Other 3-star winners were McKenna who had a hand in all three of the Warriors goals and team-mate Andy Ramsay.

Tycoons vs Macau Aces
With Aces back to full strength, there was an expectation that Aces would win the second of the playoff semi-final matches to get back onto level terms with the Tycoons who were one game up after their win on Feb 14. Although a very close match, ending 2-2 at full time, Tycoons Brad Smith, assisted by Kory Falite got the winner 2:45 minutes into an 8-minute over-time session.

In a free flowing first session Tycoons got off to a good start with goals by Anthony Devolz and Kory Falite in the 1st and 3rd minutes respectively. Darren Winia and Jeff Griffin countered in the 4th and 6th minutes to leave the teams 2-2 after period-1.

The rest of the match to end of regular play was goalless showing the evenness of the two sides and the game going to overtime to separate the teams. After attacks at each end had been unproductive, Brad Smith broke away with a fast run at the Aces goal and with the help of Kory Falite and Jonathan Szychta slotted it past disappointed goalie Jimmy Bjennmyr for the win. There were 33 attacks on goal at both ends with this final strike the only difference between the two teams.

Next Matches
The Final of the playoffs takes place at Mega Ice on Saturday, March 14.