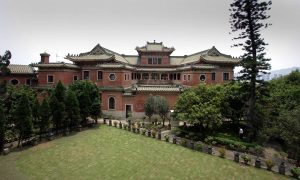 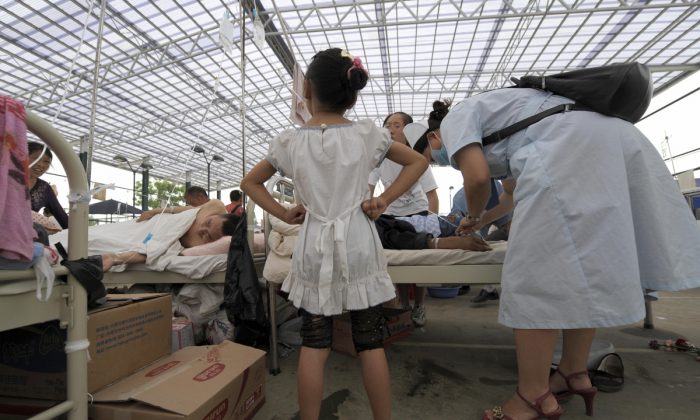 A girl standing at a hospital in China. (Liu Jin/AFP/Getty Images)
China Society

A 10-year-old girl was stopped by police for going out with her 3-year-old sister at night on an electric moped to visit her sick mother in a hospital in Nanjing City, China, according to the Jiangsu Public News Channel.

Local police spotted the two young girls riding their moped on the streets late at night on June 3. When they were stopped, the eldest sister attempted to run away from the police to go to see her mother on her own.

The police contacted the father, who was already accompanying the mother in the hospital. Eventually, he arrived at the scene and took his daughters home.

Despite being reprimanded by the police, the girls received much praise on social media for their endearing reason to go visit their mother.

“I’m bringing her some spending money so she can get better,” the girl told the police officer, according to the Jiangsu News report.

Neither the girls’ names nor the father’s name were given.

The hospital was 12 miles (20 kilometers) from the girls’ house, according to the Jiangsu News. In a video footage captured by police body cameras, the 10-year-old girl is seen holding a phone in her left hand against the handle bars, for which she may be using a driving direction app.

When the police realized how young the moped driver and passenger were, they pulled them over.

The 10-year-old girl explained why she was out with her younger sister. “My mom is sick and in the hospital,” she told the police, according to Jiangsu News.

“Are you out buying something for your mom to make her healthy?” the officer asked. The girl nodded and affirmed him, her voice cracking as she teared up.

The police warned the girl that she was too young to be driving the moped. The father, who was with their mother in the hospital at the time, was then contacted.

The police told the girls that they could take them to the hospital, but the older girl wanted to go alone. “No, I want to find her myself!” she yelled at the police, according to the Jiangsu News. She then attempted to run away, and screamed in protest when the police caught her.

The girl was then convinced to speak with her father on the phone.

Eventually, their father arrived at the scene. “You knew you were running away, didn’t you think how serious this was?” the father can be heard saying to the girls.

The girls then agreed to go with their father. “This child is alright, [she] loves her parents,” a bystander can be heard saying off camera, according to the Jiangsu News report.