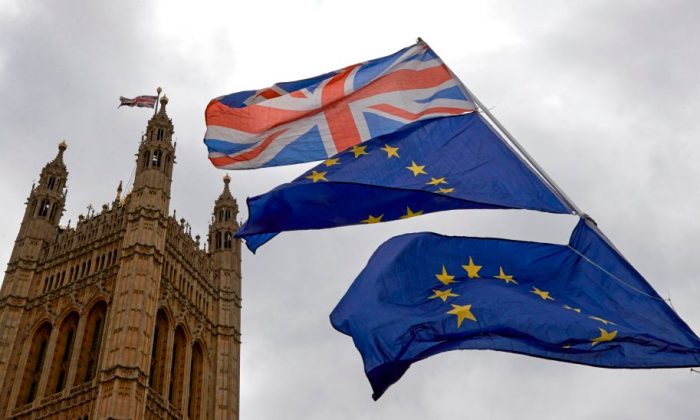 Union and European Union flags are flown in unison during an anti-Brexit demonstration outside the Houses of Parliament in London on June 20, 2018. (Niklas Halle'n/AFP/Getty Images)
UK

2 Years After Brexit: Divided, Frustrated, UK Heads Into the Endgame

Britain’s referendum on European Union membership in 2016 split the UK into a nation of “remainers” and leavers.” But after two years, neither camp is happy with how things are going.

On Saturday, pro-EU remainders will head into the streets en masse to vent their frustrations on the two-year anniversary of the vote.

But with the UK still wed to the EU—and the process mired in party politics—those who voted to leave are frustrated too as negotiations with the EU head into the endgame.

“There is disappointment on both sides with the negotiations,” said Ian Montagu, an expert in social attitudes data who works at NatCen for Social Research alongside Ian Curtice, one of the few pollsters to correctly predict the latest UK election result.

“People have become a bit more pessimistic about anticipating the consequences of Brexit, but even more so they’ve become critical of how the negotiations process is being handled.”

But the pessimism among those who voted to leave the EU doesn’t mean that they are changing their minds, he said.

Prime Minister Theresa May has struggled to patch together a Brexit plan with a party rife with division, a wafer-thin parliamentary majority, all the while fighting off attempts to wrest final control over the direction of Brexit from her administration to lawmakers.

By October, she needs to complete negotiations with the EU on a deal that will determine what Brexit will really look like.

Before the referendum, many experts had warned of the inherent complexities of leaving the EU, describing it as the biggest undertaking since World War ll.

Two years on from the vote, and those complications are manifesting.

“I think most people who understand the European Union knew that Brexit would be very, very difficult, ” said Anand Menon, professor of European Politics and Foreign Affairs at Kings College London and director of the UK in a Changing Europe Initiative.

“Whoever had been prime minister, whatever the majority had been, Brexit would have been very hard to do,” he said.

The EU and Britain are currently in negotiations that need to resolve three main issues: the bill for leaving the club; EU citizen’s rights in Britain and vice versa; and the question of the border between Northern Ireland and Ireland.

How to handle the land border between EU member Ireland and Northern Ireland ties together all kinds of politically charged threads, including customs arrangements, immigration, and the stability of the peace agreement that marked the end of decades of sectarian violence.

With the majority of the government’s own lawmakers voting to remain in the EU, Brexit is “always pitting the will of the people against the will of the Parliament,” said Menon.

Brexit supporters have been keeping a wary eye on lawmakers, suspicious that they might try to block or water down Brexit, despite promises to respect the referendum result—a result that, in theory, Parliament is not bound to follow.

Viviana Spaghetti is a senior consultant at PR consultancy Whitehouse Consultancy, who advises clients on the progress and implications of Brexit. She said that one of the problems has been a lack of preparedness before the referendum.

“This is the first time that a member of the EU has voted to leave. We think that those complexities weren’t really taken into account before the referendum,” she said. “I think the result of the vote was something that surprised a lot of people. But the complexity of the process to me was very clear from the beginning.”

Former Prime Minister Tony Blair recently said he thought that the chances of Brexit being reversed is around 40 percent.

His analysis is not widely shared, however, especially with polls suggesting only a 4 percent lead for leaving the EU.

“The only way that Brexit can be stopped at this point is by having another referendum,” said Menon. “Given the mood in Parliament, and given how they talk about the ‘will of the people,’ I don’t see how Parliament overturns it.”

Montagu points out that there is no solid sign in the polling data of an increasing appetite for a second referendum.

Spaghetti said that she does not think Brexit will be reversed. “We think that Brexit will happen in some sort of way. The way in which the negotiations are happening, it really looks like we will head for what they call a ‘soft brexit,’ or regulatory alignment.”

Whatever the precise outcome, she said that the key issue is that the UK will become a third country in March 2019 or in 2020.

“It is most likely that there will be a transition period, what the UK calls implementation period, until 2020,” explained Spaghetti.

However, legislation introduced by May’s administration means that the UK sever constitutional ties with the EU at an earlier date—on March 29, 2019.

This makes a transitional deal potentially undesirable, he explained, because during that period the UK will have no influence on EU policies and laws and yet still be bound by them.

The negotiations with the EU are reaching the “endgame” Menon said.

EU negotiators intend to wrap up the deal by the weekend of Oct. 18-19, in time to put it to a vote from other EU countries. By January 2019, the treaty should be verified by both the UK and the EU.

But anyone looking for clarity ahead of time may be disappointed: EU negotiations always go to the wire, Menon noted.