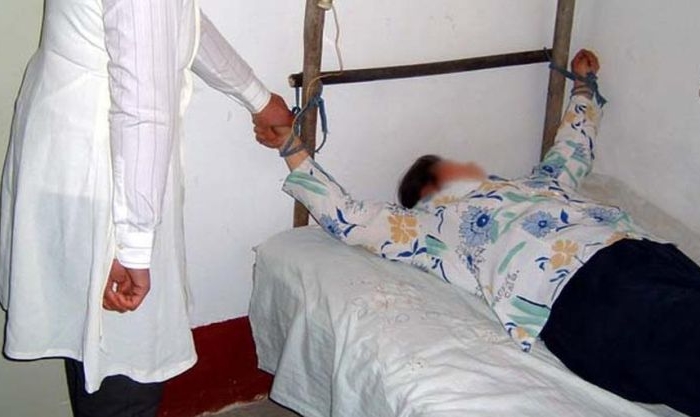 Torture reenactment: Being injected with unknown drugs (Minghui)
The Dead End of Communism

Prisoners of Conscience in Communist China Injected With Nerve-Damaging Drugs

A Chinese woman has revealed she was injected with unknown drugs while she was imprisoned for her belief. She survived, but her friend—who was also injected with drugs—died shortly after the ordeal.

The two women, Bi Yunping and Yang Xiuhua, were imprisoned in Heilongjiang Province for persisting in practicing Falun Gong, a form of traditional Chinese meditation and spiritual practice. The information was released in a Feb. 2 report from Minghui.org, an online clearinghouse for first-hand information about the ongoing extrajudicial persecution of the practice.

Since July 1999, Falun Gong has been in the crosshairs of a Chinese Communist Party persecution campaign. According to a report last year from former Canadian MP David Kilgour and human rights lawyer David Matas, as many as 1.5 million practitioners may have been killed for their organs over the last 15 years. It details a widespread state-run hospital system that harvests the vital organs from Falun Gong practitioners—often without anesthetic—and killing them in the process.

The Minghui report, which cited Yang, stated that Bi was “injected with an unknown drug and immediately began experiencing heart problems. She was carried out of the room.”

When Yang was released several years later, she learned that Bi died the same day she was given the injection.

Yang, who was being held in solitary confinement for “refusing to give up her belief,” then went on a hunger strike to protest her treatment before officials tied her hands to a bed and injected “pink liquid” from a syringe into her body, according to the report.

The guards told her the liquid was a nerve-damaging drug used specifically to torture practitioners of Falun Gong.

Some Places in China Waver on Persecution of Falun Gong

“After the injection, she felt very sick, her body felt very heavy, and her skin became very loose,” according to Minghui.

The director of the prison hospital apparently just shrugged it off, telling her: “Bi Yunping died because of what I injected into her. So what?”

In recent days, around the Chinese New Year, which was Jan. 28 of this year, 49 practitioners of Falun Gong were arrested in Harbin, located in Helonjiuang Province, Minghui said in another report.

Jiang Zemin, the former leader of the Chinese Communist Party who rose to power through supporting the Tiananmen Square massacre, ordered the persecution of Falun Gong on July 20, 1999, citing a peaceful appeal by some 10,000 practitioners in Beijing in April of that year as evidence that the spiritual practice threatened the stability of Party rule. Before the persecution, between 70 to 100 million Chinese practiced Falun Gong in China, according to official Chinese and Falun Gong sources respectively.