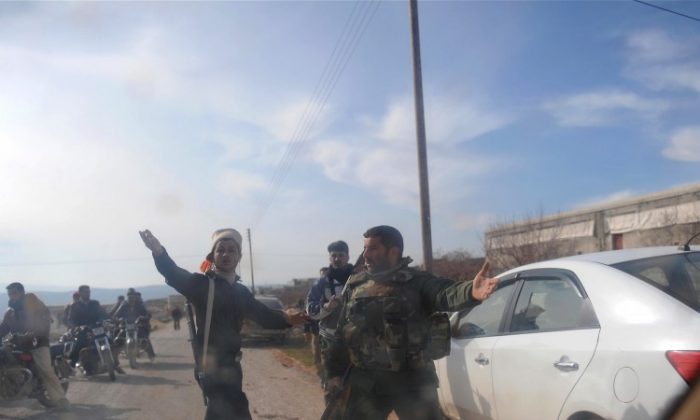 Seen through the windshield of a car, members of the Free Syrian Army (FSA) take position in Idlib in northwestern Syria on Feb. 22, 2012. (BulentKilic/AFP/Getty Images)
Middle East

Two Western journalists and one local cameraman became the latest victims of the unceasing violence in the Syrian city of Homs on Wednesday. Activists say at least 20 more people were killed in the city.

An activist in the Bab Amro neighborhood of Homs told Al-Jazeera that Marie Colvin, a journalist for the U.K.’s Sunday Times newspaper, and Remi Ochlik, a French photographer, were killed when a building they were staying in was shelled by Syrian forces. Another nine people were also killed in the shelling, which has been ongoing for nearly than three weeks.

A third journalist, local videographer Rami al-Sayed, also died covering a bombardment on Tuesday, according to the Committee to Protect Journalists (CPJ)

French Foreign Minister Alain Juppe summoned the Syrian ambassador in France, demanding that Damascus “provide safe medical access in order to assist the casualties with the support of the International Committee of the Red Cross,” according to a statement.

Colvin, 55, was considered one of the world’s pre-eminent war correspondents, according to CJP. She covered events in many war-torn countries and lost an eye while covering the civil war in Sri Lanka.

She worked for the Sunday Times for two decades and said in her final report on Wednesday that the shelling in Homs was constant.

“Almost every building is pock-marked after tank rounds punched through concrete walls or rockets blasted gaping holes in upper floors. The building I was staying in lost its upper floor to a rocket last Wednesday,” she wrote, adding that “there are no telephones and the electricity has been cut off.”

Syrian Information Minister Adnan Mahmoud said via state television that they had no information about the two journalists entering the city. Citing Mahmoud, state television said, “All foreign journalists who entered Syria illegally to refer to the nearest immigration department in the areas of their presence to regularize their status according to law.”

“Our colleagues Marie Colvin, Remi Ochlik, and Rami al-Sayed gave their lives to report a story of grave importance, a story the Syrian government has sought to choke off from rest of the world,” said CPJ Deputy Director Robert Mahoney, in a statement from Cairo. “The deaths of these local and international journalists illustrate the escalating dangers to independent journalists working in Syria and the unacceptable price our colleagues are being forced to pay.”

A total of seven media professionals have been killed during the unrest in Syria.

“We condemn in the strongest terms this threefold crime. The Damascus government … has decided to punish the entire population collectively and to use the most violent means to silence those journalists who witness its excesses,” said media watchdog Reporters Without Borders in a statement.