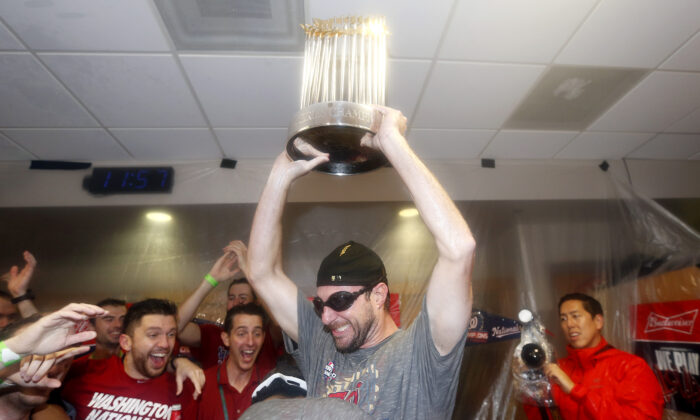 Max Scherzer #31 of the Washington Nationals celebrates in the locker room after defeating the Houston Astros in Game Seven to win the 2019 World Series at Minute Maid Park in Houston, Texas on Oct. 30, 2019. (Elsa/Getty Images)
Viewpoints

One of the greatest attractions of professional sports, other than the joyful opportunity to see athletes perform at a level that most of us can only dream of, is the perpetual unpredictability of it all.

The National Football League is celebrating its 100th season (a bit of a stretch, since there were only a few teams in 1920 and you could argue that the sport didn’t really “take off” as a national passion until the 1950s, thanks to television). Major League Baseball is decades older, although the modern version might be dated at 1903 when, for the first time, every MLB player used fielding gloves.

Despite the lengthy histories of these two national pastimes, in October 2019, sports fans witnessed something in each of the two sports that had never happened before. Let’s start with baseball.

On Oct. 30, the Washington Nationals won the World Series, and did so in unprecedented fashion. This was the first best-of-seven championship series–not only in baseball, but including hockey and basketball, too–in which the home team lost every game. The odds of this happening are about one in 200, so some people reading this may see it happen again–but don’t bet on it!

The complete disappearance of “home field advantage” was far from the only interesting story in this Series.

In the first inning of Game Six in Houston, the home team’s cleanup hitter, Alex Bregman, homered to put his team in the lead. Apparently admiring his achievement, Bregman carried his bat all the way to first base, handing it off to his coach. The gesture might have been innocent, but it was a major league faux pas; it screamed “showboating.” That could have been the turning point in the game and the Series, because that was the last run the Astros’ scored in that game, and the Nationals came from behind to win.

The lesson of this story is encapsulated in the wisdom of two famous sayings: “Let sleeping dogs lie” and “Pride goeth before a fall.”

There was a notable individual “first” this fall. Washington’s Stephen Strasburg became the first pitcher to notch five victories and zero defeats in a single post-season. In contrast to Strasburg’s success, post-season struggles continued for one of the game’s great pitchers, the Astros’ Justin Verlander. Verlander won a MLB-leading 21 games this season while striking out 300 batters and pitching his third career no-hitter (becoming only the seventh pitcher in history to accomplish that feat).

But in the Series he faltered, losing both games he started. Verlander now has a career World Series record of 0-6. His lack of success in the World Series mirrors that of National League ace Clayton Kershaw–a dominant regular season pitcher with pedestrian post-season results. It’s inexplicable. There is no rational reason for Verlander’s (or Kershaw’s) World Series troubles. It’s sports, and in sports, things just happen.

One final point: It’s often said that the winner of the World Series often isn’t the best team over the course of an entire season, but just the team that happens to get hot in October. There is a lot of truth in that generalization, but I don’t think it applies this year.

True, the Nationals squeezed into the post-season as a wild card team that didn’t even win its own division, but that is somewhat misleading. Since getting off to a horrendous start, losing 31 of its first 50 games, the Nationals played the rest of the season at a .660 winning percentage over its final 122 games–matching Houston’s MLB-best percentage over the entire season.

For the last four months of the regular season, the Nationals and Astros were the two best teams in baseball. They deserved to meet in the World Series, and it’s no surprise that the Series lasted the maximum seven games.

Let’s switch to football now. One of the great things about sports is that an athlete doesn’t have to be a perennial all-star to get into a sport’s record book. At the halfway point of the NFL season, a journeyman receiver currently playing with my team–the Detroit Lions–has become the first player to average over 40 yards per reception with a minimum of five receptions. Amazing–almost half a football field per catch! It’s rather flukish, and, of course, it won’t last, but whatever else happens in Marvin Hall’s career, he will be able to tell his grandchildren that he once set an NFL record.

Of greater interest to sports fans is the historic way the New England Patriots are running away with the American Football Conference East divisional championship.

Thus, at the halfway point of the season, the Patriots have scored only two points less than their opponents’ cumulative total, without counting a single play by their offense. And since the offense is a well-oiled scoring machine led by the consensus GOAT (greatest of all time) in NFL history, quarterback Tom Brady, you would have to say that the odds of the Patriots returning to another Super Bowl in February (which would be their ninth in the last 17 seasons) are pretty solid.

It seems like the only way they could miss out would be if the team jet disappeared in the Bermuda Triangle (heaven forbid!), but let’s remember one of the oldest sports truisms of all: the game is played on the field, not on paper. Who, I wonder, might be the team to capitalize on the mouth-watering opportunity to play its best game ever and defeat a historically good New England Patriots team?

We have a lot to look forward to, sports fans.