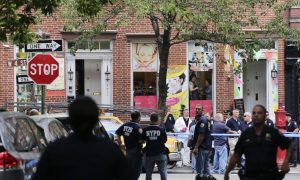 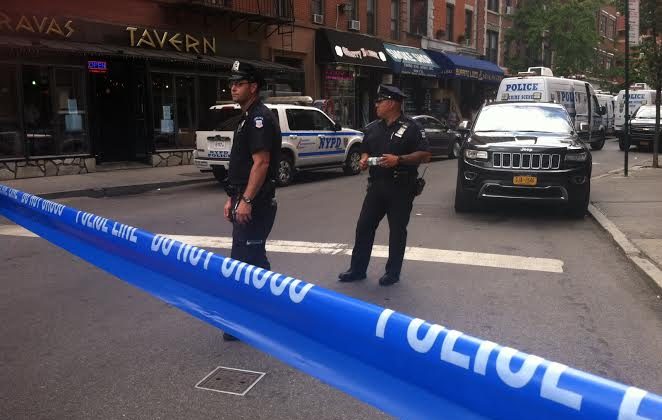 The crime scene in West Village where three law enforcement members were injured in an attempt to arrest a sex offender from California. (Genevieve Belmaker/Epoch Times)
Crime and Incidents

Shooter of US Marshals in Greenwich Village, NYC Was California Sex Offender

UPDATES: The suspect was identified as Charles Mozdir, a wanted sex offender who was recently featured on CNN’s “The Hunt with John Walsh.”

NEW YORK—Charles Mozdir, a fugitive, shot two U.S. Marshals and one NYPD detective this afternoon on 177 West Fourth St. and MacDougal Street in Greenwich Village, according to NYPD. The shooter is dead.

The two U.S. Marshals were shot while issuing a warrant for child molestation in which Mozdir molested a young boy. Evidence of child pornography and bestiality was found on his cell phone and computers, according to CNN. The U.S. Marshals were part of a fugitive task force.

All three injured victims are in stable condition, NYPD Commissioner William Bratton said at an afternoon press conference. The NYPD detective was taken to Bellevue Hospital.

“One male NYPD detective was shot once, possible twice in the abdomen,” he said. The detective has been with NYPD since 1993.

“The shop has loud music inside, I didn’t hear the gun shots,” said Avan Kim, a tattoo artist at Moon Sheen Tattoo, which is located near the site of the shootings. He said he was unaffected by the incident. “They do what they do.”

“I think it’s terrible. I heard he was working in the barber shop over there,” said Ricardo Kowers, an employee at Volare, which is a block away from the scene.

This is a breaking news story, please check back for more updates.