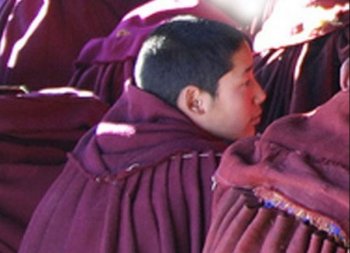 Two Tibetan monks set themselves on fire Monday in an apparent plea for religious freedom and an end to China’s continued vilification of their spiritual leader the Dalai Lama, an overseas Tibetan rights group and media reports have said.

The two are teenagers between the ages of 18 and 19 and self-immolated in Sichuan Province’s Aba Prefecture, according to reports and the Britain-based Free Tibet group. One of the monks is believed to have died at the scene and the second still moving after the fire was extinguished. They were then taken away, but they have been identified as Lobsang Kalsang and Lobsang Konchok of the Kirti monastery.

The monks set themselves ablaze after waving the banned flag of Tibet and crying out, "Long Live the Dalai Lama." Firemen and public security agents rushed to the scene. China’s state-run mouthpiece Xinhua has reported that the two monks had been taken to a hospital and were in stable condition and that an investigation was underway.

The ruling Communist Party (CCP) has intensified its attempted brainwashing of Tibetan monks this year, calling it "Patriotic Education." Monks are urged to sign declarations supporting the CCP and slandering the exiled Dalai Lama. A no-interest loan is offered to monks who refuse to return to the monastery, which is rejected as a bribe by those Tibetans who remain firm to their faith.

The US State Department on Tuesday said it was "seriously concerned" by the reports of the self-immolation and called on the Chinese regime "to respect the rights of Tibetans, to address policies in Tibetan areas that have created tension, and to protect Tibetans’ unique religious, cultural and linguistic identity."

Monk Kalsang’s brother had died this past March in his own self-immolation. BBC News reported that monks from the same monastery had been sentenced to 10 years in prison for assisting with the self-immolation.

March was the third anniversary of the 2008 Tibetan protests in the capital of Lhasa which drew international attention.

A issue that divides Communist authorities and Tibetans is whether the Dalai Lama can choose his own successor or whether the officially atheist regime will make the selection. The exiled leader, 76, hopes to live to 90 but has been ailing recently.