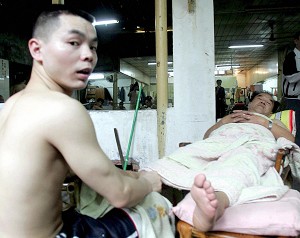 A man gets a traditional foot massage at an old bathhouse in Fuzhou, southeastern China's Fujian province. (AFP/AFP/Getty Images)
China

CHINA—An advertisement looking for bathing and massaging workers with hourly rates of 58 yuan (approximately US$7.52) from a bathing center in Beijing attracted thousands of applicants from university graduates.

According to the Beijing Evening News and Legislation Evening News, there were more than 200 college graduates who responded to the ad from the Quanjincheng Group on the morning of April 15. The positions available included bathing and massaging workers, waiters, cleaners, receptionist assistant general manager, and so forth. An assistant general manager's hourly rate is only one yuan (the wage includes two parts: basic pay and hourly pay), whereas a bathing and massaging worker's wage is as high as 58 yuan per hour.

Within four days, Quanjincheng Group had received more than 5,000 resumes from Beijing, Langfang, and Shiiazhuang, and more than 10,000 phone calls inquiring if the positions were still available.

The correspondent for Quanjincheng Group noted that out of the 5,000 university graduate applicants about 40 percent of them applied for the bathing and massaging worker's position.

By 11:00 am on the interview date, several girls began their foot massage training and the boys the bathing and massaging training. One of the girls said sheepishly, “I've never massaged feet before. It's a bit embarrassing.” Many of the students remarked that this was a “low profile” way of entering the work force. One Tsinghua University graduate with a master's degree applied for the receptionist job and was prepared to work with no pay during the probationary period.

This phenomenon has caused public debate. People commented in the Western Chinese Commercial News that such stories only indicated that the money-chasing trend, instead of the idealistic and entrepreneurial spirit, is prevailing amongst the younger generation.

A reader's letter published in the Qilu Evening News said that many university graduates have to lower their standard because of the extreme difficulties in the employment market, and suggested to encourage the younger generation to adjust their attitude under the pressure of the low employment rate for better usage of their knowledge and technology.

Some Internet surfers criticized that this only explains the failure of the current education in China.