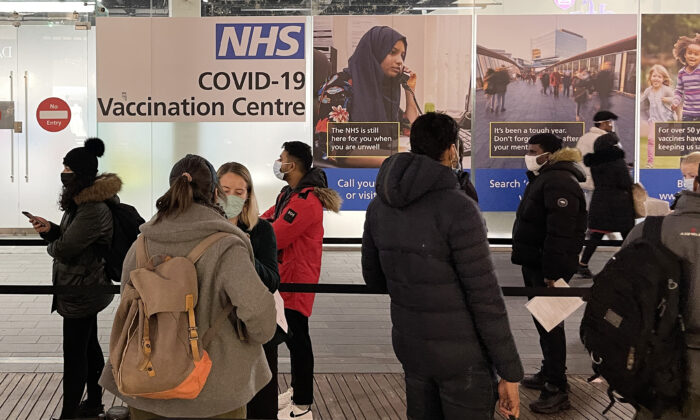 A queue of people waiting to receive their COVID-19 booster jab at an NHS vaccination centre in London on Dec. 14, 2021. (Leon Neal/Getty Images)
WORLD

Two-Thirds of People Infected With Omicron Say They Had COVID-19 Before: UK Study

About two-thirds of people recently infected with the Omicron variant say they have had COVID-19 before, according to a new UK study.

Among 3,582 individuals who tested positive for the CCP (Chinese Communist Party) virus between Jan. 5 and Jan. 20, 2,315, or 64.6 percent, said they had previously had COVID-19, researchers found.

Professor Paul Elliott, who leads Imperial College London’s React-1 study (pdf), said these cases could not be technically labelled as reinfections because it was possible a person had tested positive twice for the same infection.

The data was unable to indicate at what point in the past people had tested positive for COVID-19.

The UK Health Security Agency (UKHSA) has said it will start including data on possible reinfection on its COVID-19 dashboard from the end of January.

Those testing positive 90 days or more after a previous infection will be considered a reinfection.

Reinfections will be backdated to the beginning of the pandemic in 2020 and will be published alongside and added to the daily totals for England. Data for Wales, Northern Ireland, and Scotland will be added as soon as possible.

Researchers in South Africa, where the Omicron variant was first detected in November 2021, have found that the variant is better at evading immunity from prior infection than the Delta and Beta variants.

Omicron has also been found to be much more effective at infecting people who have been vaccinated against COVID-19.

New data from the React-1 study suggests the peak of the Omicron wave in the UK was around Jan. 5, with cases flattening off by the middle of January.

The highest prevalence was 4.41 percent between Jan. 5 and 20, meaning during this period 1 in 23 people in England was infected with COVID-19.

The data also show that Omicron has become the dominant variant in England and has almost completely replaced Delta.

Health Secretary Sajid Javid said it is “reassuring to see COVID-19 infections beginning to slow across the country,” but it is “vital” to continue to be vigilant.

Some scientists are already predicting COVID-19 will soon become endemic.

Professor David Heymann, from the London School of Hygiene and Tropical Medicine, said on Jan. 11 that the UK is probably “the closest to any country of being out of the pandemic if it isn’t already out of the pandemic and having the disease as endemic.”

Paul Hunter, professor in medicine at the University of East Anglia, also said on Dec. 28 that COVID-19 will become “just another cause of the common cold.”