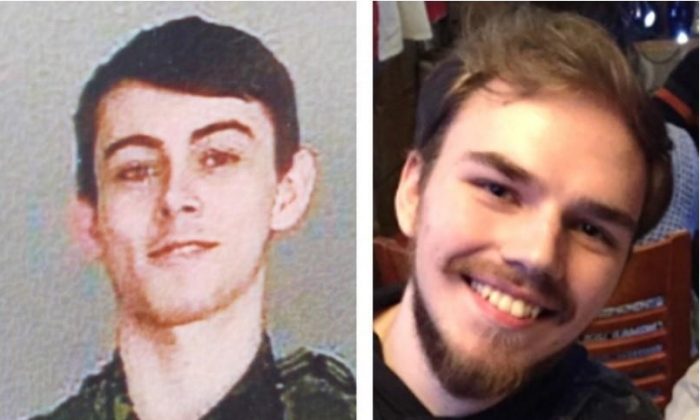 Bryer Schmegelsky, left, and Kam McLeod are seen in this undated combination handout photo provided by the RCMP. RCMP say two British Columbia teenagers who were first thought to be missing are now considered suspects in the deaths of three people in northern B.C. (HO, RCMP/The Canadian Press)
Canada

VANCOUVER—Two British Columbia teenagers who were first thought to be missing are now considered suspects in the deaths of three people in northern B.C.

Kam McLeod, 19, and Bryer Schmegelsky, 18, are suspects in the deaths of Australian Lucas Fowler, his American girlfriend Chynna Deese, and an unidentified man found a few kilometres from the teens’ burned-out vehicle, RCMP said Tuesday.

She said if anyone spots the teens, both six-foot-4 inches tall and weighing around 169 pounds, consider them dangerous, don’t approach, and call 911.

Police initially thought the teenagers were missing but after making an appeal to the public on Monday, investigators have new information that leads them to believe they are suspects in all three deaths, Shoihet said.

“I think that is a testament of how dynamic and ever-changing the information is,” she said.

Shoihet said she could not release details about how investigators determined McLeod and Schmegelsky were suspects. But she said police are taking the “unprecedented” step of urging anyone with information on their whereabouts to come forward.

RCMP also released new photographs of the teens taken recently in northern Saskatchewan. Mounties did not say specifically in which community were seen.

She said she could not disclose how the unidentified man found near the teens burned-out truck had died. Police have released a composite drawing of the heavy-set, middle-aged man with a beard and are still hoping he will be recognized.

RCMP has been in contact with both teens’ families to ask for help finding them, she said.

“I’m certain they’re being impacted by this news,” she said.

Kevin Hackett, RCMP assistant commissioner, said the Mounties could not release any information that would jeopardize a future prosecution or compromise the integrity of the investigation.

“There are many people who we are yet to speak to that have key facts that could build upon the current evidence and information that we have,” he said.

“Any information that builds upon, that impacts, that changes somebody’s memory or recollection, would be negative from an investigative standpoint.”

He said the RCMP is continuing to work across the country with law enforcement partners in attempting to track the teens’ movements.

Police have previously said the teens had been on their way to Yukon to look for work.

Fowler’s father, Chief Insp. Stephen Fowler of the New South Wales Police Force, told the media on Monday that the deaths of his son and his girlfriend was a tragic end to a love story between the inseparable couple.

Fowler said Lucas, 23, was having the time of his life and the family was overjoyed when he met Deese, 24, who were a great pair and fell in love.

Police released a composite sketch of a man a witness saw speaking with the couple on the Alaska Highway, also known as Highway 97, on the evening of July 14.

Shoihet said the man was driving an older-model Jeep Cherokee with a black stripe on the hood and police would still like him to contact them.

Mounties faced questions on Tuesday about why the police did not release more information immediately after Fowler and Deese were found shot dead on July 15 along the side of the Alaska Highway in northwest B.C.

McLeod and Schmegelsky’s burned-out truck and the unidentified man’s body were found four days later in northeast B.C., more than 470 kilometres away from the first crime scene.

Shoihet said RCMP issued a news release soon after Fowler and Deese were found and investigators were working hard to find the person or persons responsible.

Hackett added that the bodies were found in a remote area where police had to conduct forensic examinations, scour the scene and collect evidence.

“The worst thing any investigator can do is to mislead the public without the facts. Sometimes that translates to waiting longer. What I would ask in this instance is that people be patient.”

We are asking the public that if you spot Kam McLeod or Bryer Schmegelsky to consider them as dangerous – take no actions – do not approach – and call 911 immediately. pic.twitter.com/RdhBNVr5im