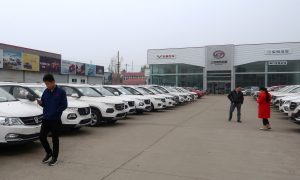 Stock photo of an ambulance in Toronto. (Michael Gil via Wikimedia Commons)
Trending

Two Teens Save Baby Girl After Coming Across Car Crash

Two teens are being praised for their heroism after helping rescue a toddler whose mother died in a car crash in Illinois.

The teens—Hunter Hasenjaeger, 16, and Collin Barry, 17—were heading home from a friend’s house in Minooka, Illinois, when they spotted a crash.

“We could see smoke and the car on the left side [of the road],” Hasenjaeger told Inside Edition.

“I just saw the car and the whole front was totaled on the driver's side. We could hear the baby crying extremely loud and screaming.”

They saw people at the scene yelling amid debris and rubble. “They were screaming, saying there was a baby in the car, and we could hear the baby screaming and crying,” Hasenjaeger said.

When he looked inside the car wreck, Hasenjaeger saw a 1-year-old girl. He also saw the mother, later identified as 27-year-old Alexis Danley, in the front seat in serious condition.

“We took her out and she quit crying,” Barry added. “The baby was so peaceful, like she wasn’t crying or anything, so if the family was gonna see [what happened], just wanted them to know the baby wasn’t freaking out or anything.”

Danley was pronounced dead at the scene of the crash, while the baby was hospitalized and released to family members. Danley’s Chrysler 300 was hit by a Chevy Silverado.

The driver of the Chevy, 23-year-old Jacob Kaminski, hit a Toyota Camry. He was arrested on suspicion of driving under the influence of marijuana, WGN-TV reported. Three people inside he Camry were not hurt.

Hunter and Collin came across the accident and sprung into action when they heard someone scream, “there’s a baby in the car!”

“She was hanging out the front of the car,” Barry said of Danley.

“Her arm was hanging out and her other hand was reached back grabbing the baby seat.”

Kaminski was hospitalized and was later sent to the Kendall County Jail.

“It’s just depressing and sad,” Hasenjaeger added to People magazine. “I brought [Danley’s] family over food and brought the baby a little teddy bear. That helped me cope with it.”

He then said, “Her mom is really upset. They just thanked me from the bottom of their heart and said that I’m a hero. But I just don’t think that I’m a hero—I just did what anyone should have done.”