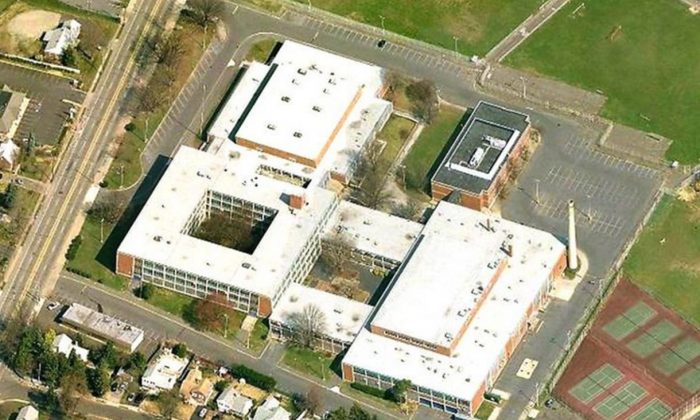 Three students at George Washington High School in Philadelphia allegedly assaulted a teacher, according to reports on Monday.

The teen suspects are now in custody after the assault, which took place inside a classroom, reported ABC-6.

Police said a male teacher was teaching in a classroom when the three suspects pushed their way inside the class.  NBC Philadelphia reported that the teacher took away a student’s phone and refused to give it back when they confronted the teacher.

Students hold teacher down while one beat him

The station reported three teens tried to enter the room and after one entered, the teacher closed the door and locked the other two out, police said.

One of the teens then went inside and approached a female student and asked her where his phone was. He then went through her book bag, prompting the teacher to threaten to call the police. As he was going to use the security phone, the teen ran towards the teacher and pulled the phone out of his hand.

The teen then punched him in the face several times before the other two were able to get inside the room, officials told NBC. The two other suspects then grabbed the teacher and held him while the teen punched him. They fled the room but were stopped by school security.

The teacher was taken to Aria Torresdale Hospital as a precaution.

Two of the teens teens were taken into custody, and they were charged with aggravated assault, simple assault, disorderly conduct, conspiracy, and reckless endangerment

It comes just days after a teen said he was attacked by another student at the same high school. Sunnie Tahmas was hospitalized after a fellow freshman attacked him without provocation. “I didn’t know what was happening at all. I didn’t recognize his face or anything,” he told Fox-29 TV.

According to a PhillyVoice report last week, several parents have claimed that frequent violence between students often goes unreported at the school. They said that Principal Gene Jones has not done a good job in addressing the issue.