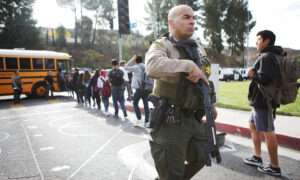 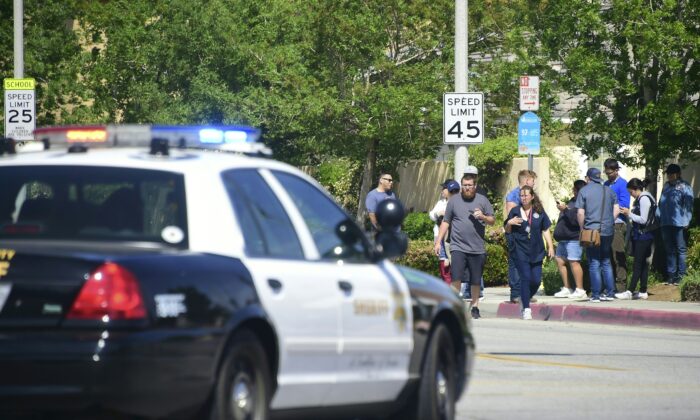 A police car at an intersection in Palmdale, Calif., on May 11, 2018. (Frederic J. Brown/AFP via Getty Images)
Southern California

Two California students who allegedly threatened to shoot up their schools were arrested a week after a suicidal 16-year-old gunman opened fire on his classmates—killing two of them and wounding three—at Saugus High School in Santa Clarita, Calif.

“We’ve received a series of threats from the Saugus shooting forward until today,” Los Angeles County Sheriff Alex Villanueva said at a Nov. 22 news conference. “We’ve acted on all of them and thoroughly assessed them.”

In two separate incidents, a 13-year-old middle school student at Animo Mae Jemison Charter Middle School in Los Angeles and a student at Pete Knight High School in Palmdale, Calif. were charged with making criminal threats. Both students, who were not named by authorities, threatened to shoot other students at their respective schools.

At Animo Mae Jemison Charter Middle School, students overheard a boy threatening to shoot his classmates on Nov. 21 and told their teachers. The teachers emailed school administrators, who then called the police.

During an ensuing investigation, which led police to the suspect’s home, sheriff’s deputies found an AR-15 style rifle with 100 rounds of ammunition and a list of intended targets—including students and school staff. Detectives also discovered a hand-drawn layout of the school, said Sgt. Robert Dean. The suspect was taken into custody.

Villanueva described the gun as a “rifle with a high capacity magazine.”

“The weapon is unregistered and we are still trying to determine the origin of it, but it does have a serial number,” he said.

While executing the search warrant, police also arrested one of the boy’s relatives for possession of an unregistered firearm. The 19-year-old male suspect is being held on $35,000 bail.

In the second incident, a student at Pete Knight High School in Palmdale, Calif. was arrested after a fight broke out on campus on Nov. 21. Several students involved the fight were detained and suspended. During a subsequent investigation, the suspect admitted he had made threats on social media and posted a picture of someone holding a firearm and bullets, Villanueva said.

“He was booked and taken to Sylmar Juvenile Hall,” the sheriff said.

“With all incidents like these, we ask all Los Angeles County residents that if they see or hear something to say something,” Villanueva said at the news conference. He praised the students, teachers, parents and school officials who stepped forward with information in both incidents.

“We want to thank everyone involved because they all did the right thing … and because of that, we were able to prevent a possible tragedy,” Villanueva said.

Both Palmdale and Los Angeles are less than 50 miles from the site of the Saugus High School shooting.

In Santa Clarita on Nov. 14 before classes started, Nathaniel Tennosuke Berhow pulled a handgun from his backpack, fired at five of his classmates, and then shot himself in the head on his sixteenth birthday. He died the next day while hospitalized in custody. The 16-second attack was caught on surveillance video, police said.

Gracie Anne Muehlberger, 15, and Dominic Blackwell, 14 died in the shooting. The three other victims were treated for injuries in area hospitals and released.

The .45-caliber pistol used in the attack was a 1911-model kit gun, assembled from parts, according to police. The unregistered firearm is also described as a “ghost gun” because it doesn’t have a serial number.

Kit guns are legal and are available at gun shows and sold online. There are also YouTube videos showing people how to assemble them.

Contrary to earlier reports, six guns registered to the boy’s late father, an avid hunter who died two years ago, were not found at the home after the shooting, but were lawfully removed before the attack and had been legally destroyed, Villanueva said.

Sheriff’s homicide detectives have not determined who assembled the ghost gun used in the Saugus High School shooting and are still working with federal entities to unlock Berhow’s cell phone, which they hope will help solve the mystery of his motive for the attack.

Police haven’t uncovered a manifesto or diary that would spell out the motive behind the shooting. However, it was reported after the shooting that a social media post, possibly made by Berhow, stated: “Saugus have fun at school tomorrow.”

Villanueva has said many times that attack was planned and deliberate.

The attack is considered at least the eleventh shooting—resulting in six deaths—at high school and college campuses in the United States this year.

In mid-October, California Gov. Gavin Newsom signed 15 gun-related bills that expand California’s so-called “red flag laws,” making the state’s gun control laws the most restrictive in the nation, according to the Brady Campaign to Prevent Gun Violence. All of the new laws will become effective Sept. 1, 2020.