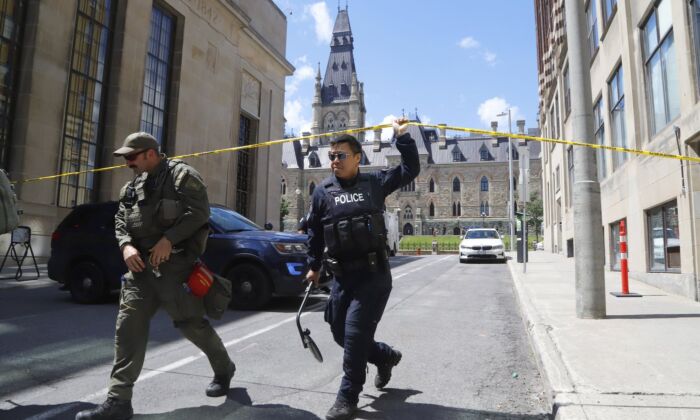 Police respond to an incident on Parliament Hill in Ottawa on June 11, 2022. (The Canadian Press/ Patrick Doyle)
Canada

Two organizers of a Sikh event set to take place on Parliament Hill Saturday say they were arrested and released after being wrongfully identified in connection to a bomb threat in the area.

Manveer Singh, an organizer of a remembrance rally for the 1984 massacre of Sikhs in India, said his group had received a permit to gather on the Hill, but when they arrived they were told they were not allowed to be there because of an ongoing threat in the area.

Parminder Singh, another organizer, said they relocated to the lawn in front of the Supreme Court of Canada nearby to hold their event.

A few minutes after their event got underway, Manveer Singh said police arrested him and told him they had “credible information” that he was connected to a serious bomb threat on the Hill.

“They believed that I’m the one who’s gonna do that. I was shocked. I’m gathering my community here to bomb them?” he said, adding that police searched him, handcuffed him and brought him to the police station for questioning.

Parminder Singh said he was arrested not long afterward by Ottawa police, who told him that his name was connected to an alleged bomb threat of Parliament.

“It doesn’t make sense because I know I am not involved in anything. I’m proud as a Canadian Sikh. I love this country, I will do everything to protect this country,” he said.

The two organizers said that police searched their cars for explosives.

He said after being in custody for a short while, police released him and apologized, adding they arrested him based on wrong information.

Ottawa police did not answer questions about the men’s account of events, saying only that the investigation into the matter is now concluded and no charges were laid.

Police said in a statement Saturday that they received information about a potential threat near the parliamentary precinct, prompting them to close some surrounding streets to vehicle and pedestrian traffic.

The Parliamentary Protective Service also ordered an evacuation of Parliament Hill, issuing an alert to all members of Parliament and staff and noting all buildings in the precinct were to be under shelter-in-place orders until further notice.

Both of the Sikh rally organizers say they are worried about the damage done to their reputation as a result of being arrested in connection to the explosives threat.

He said his group began organizing these rallies in 2017, to gather Sikhs from across Ontario and Quebec.

Manveer Singh said they have been holding these rallies for several years, with the exception of the last two years due to the COVID-19 pandemic.