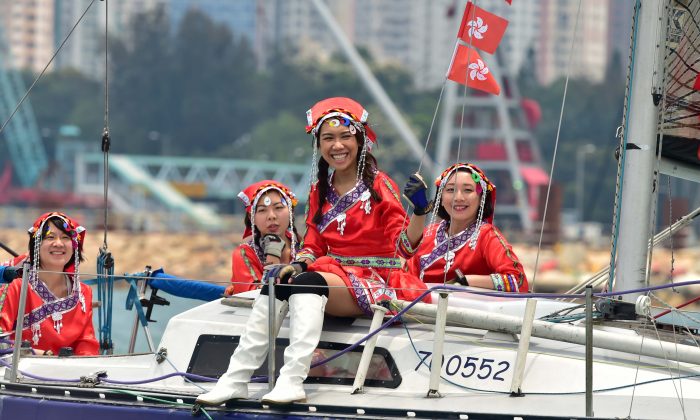 The Tomes Cup was the final race of the RHKYC’s Top Dog Trophy series which comprises the Lipton Trophy, Around the Island Race, HKRNVR and the Tomes Cup.

According to HKYC, the Top Dag series is designed to identify the most successful boat over a variety of pursuit race courses and conditions. With the Around the Island Race included in the series it constitutes a serious yachting achievement, particularly for the smaller crafts.

The Nations Cup was run on Sunday April 30, with 52 boats from 13 Nations taking part. Crews were dressed in national costumes, to a varying degree. The maidens of Hong Kong in two Ruffian Class entries (Larrikin and Skellum) made a particularly colourful scene.

Sailing conditions were generally good except many competitors experienced a wind “hole” near the bottom mark located adjacent to the Conference and Exhibition Centre giving them a little time to enjoy the scenery.