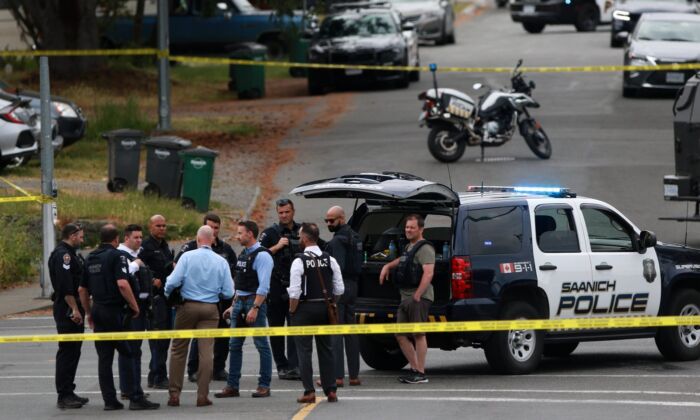 Saanich Police joined by Victoria Police and RCMP respond to gunfire involving multiple people and injuries reported at the Bank of Montreal during an active situation in Saanich, B.C., on June 28, 2022. (The Canadian Press/Chad Hipolito)
Canada

A police officer is out of intensive care after being injured in a shootout outside a British Columbia bank nearly two weeks ago.

A statement Monday says two Saanich police officers remain in hospital following the June 28 shooting while all Victoria officers who were hurt are now recovering at home.

Three Saanich officers and three from the Victoria Police Department, all members of the emergency response team, were injured in the gunfight with 22-year-old twin brothers, Mathew and Isaac Auchterlonie from Duncan, B.C., outside a Bank of Montreal.

The joint statement from the Saanich and Victoria police departments says officers and staff have been participating in debriefing sessions with both peer support and a psychologist.

It says affected officers are participating in workplace reintegration training, which includes exposure to firearms and acclimation to gunfire.

It says the program is designed to acknowledge an officer has been through a traumatic event and provides opportunities to work through any triggers created by it in a controlled environment.

RCMP have taken over the investigation into the bank robbery and have not given any other details.