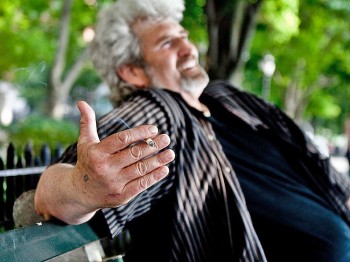 CIGARETTE BREAK: Barry takes a break from walking with his dog in Battery Park on Thursday. (Amal Chen/The epoch Times)
US

NEW YORK—Battery Park City and Hudson River Park may become popular among smokers looking for a picturesque setting to light up a cigarette. After the new citywide smoking ban in parks and on beaches went into effect Monday, the two parks may be exempt because they fall under state, not city, jurisdiction.

“The law has no effect here. It’s a city law, not a state law. This is owned by the state,” said Barry, a Battery Park City resident who was smoking a cigarette in Battery Park on Thursday.

Numerous Parks and Recreation Department’s Park Enforcement Patrol (PEP) officers said they have been told “not to issue summons because it’s state property,” according to a report by the New York City Park Advocates (NYCPA).

NYCPA claims to have obtained internal documents that instruct PEP officers not take action against smokers in these parks. In contrast, smokers in all other parks in the city could be fined at least $50, and as much as $300, if they refuse to stop smoking.

The parks department did not respond to a request for comment as of press time.

The NYPD said the matter doesn’t concern them. “We don’t enforce that law. The parks department and the health department [do], not us,” stated an NYPD spokesperson.

Hudson River Park, a 150-acre park partially owned by the state, is also not participating in the smoking ban, according to the NYCPA. Both parks have refused to install “no smoking” signs that other parks are installing, says the NYCPA.

“Is there a smoking ban here?” asked a visitor from California smoking a cigar at Battery Park City.

It is still unclear how seriously New Yorkers are going to take the new smoking ban. The added confusion of state-controlled parks being exempt may further dilute the law.

Some are worried about the quality of life of smokers.

“They should have a spot specifically for them to smoke. It is outdoors, so they’ve got to give them somewhere they can smoke,” said John from Brooklyn.

While indoor smoking bans are common throughout the nation and the world, outdoor smoking bans are a relatively uncharted territory. Cleveland has a proposed ordinance banning outdoor smoking on city property, including making workers walk 150 feet away from their workplace to smoke. Albuquerque, New Mexico, prohibits smoking in parks and some public venues, like the zoo.
Visitors from outside the United States hanging out in Battery Park weighed in on the subject.

“I find it very good that we cannot smoke in closed spaces because it harms others, but in open spaces I think it’s wrong [to ban smoking],” said Teresa Auil, a tourist from Brazil, through a translator. “It’s discriminatory toward the smoker, because it’s not allowing space and freedom.”

“We support smoking bans,” said Susan from London. Her companion, Dave, added: “I would support an outdoor smoking ban in public area where I want to be outside, and I don’t necessarily want to be breathing in smoke.”