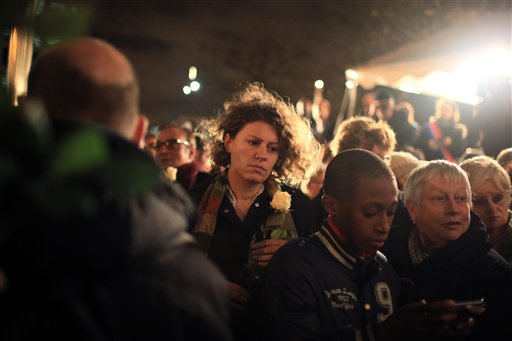 A woman holds a flower during a rally outside the Stade de France stadium, in Saint-Denis, north of Paris, Thursday, Nov. 19, 2015. (AP Photo/Thibault Camus)
Europe

Two of the Paris Suicide Bombers Posed as Refugees to Sneak Into Europe via Greece: Prosecutors

Two of the jihadists who blew themselves up at France’s national stadium in Paris last week passed through Greece posing as refugees.

Paris prosecutors confirmed in a statement that both men were checked by authorities on Oct. 3 in Greece. They did not name either man in their statement or the specific place in Greece, but earlier reports pegged one man as Ahmed Al-Mohammad, 25, whose Syrian passport was found on the body of one of the bombers.

“A new Stade de France suicide bomber, who blew himself up at 9:30 p.m. on Rue Rimet, H Door in St Denis, was formally identified and his fingerprints matched those of someone who passed through Greece on the 3 October 2015,” the prosecutors said in a statement.

“It was during this same immigration check that the other suicide bomber who blew himself up at 9:20 p.m. at D door of the Stade de France had his fingerprints registered.”

A Greek official previously noted that a man carrying a Syrian passport with the name of Ahmad Al-Mohammad was processed Oct. 3 on the island of Leros after coming in from Turkey. But at least one report had said Al-Mohammad blew himself up at the Bataclan concert hall, not the stadium.

The confirmation provides fuel to officials around the world, most notably in the United States, pressing for refugee restrictions citing concerns that terrorists could sneak in alongside regular refugees. European officials have also moved to bolster security within Europe, including internal borders.

It’s still unclear whether the Al-Mohammad passport was stolen, doctored, or real. So far, just one of the suicide bombers at France’s national stadium has been formally identified by name, Brahim Abdeslam.

Reuters previously reported that the terrorist holding the Al-Mohammad passport had arrived in Greece alongside 198 other refugees by boat from Turkey, and that he may have been traveling with an accomplice.

A counter-intelligence source in Macedonia, further north, said the two men were still traveling together two days after reaching Piraeus. They stayed together in Serbia, too.

MORE: Paris Terrorist on the Run Is Reportedly Using a Disguise and False Name

The French confirmation comes just two days after Honduran authorities said they intercepted six Syrian nationals who were traveling on doctored Greek passports, including five who had been trying to reach the United States.

This in turn followed police in St. Maarten detaining three men who they said were Syrians who arrived on a flight from Haiti and were traveling on false Greek passports. In Paraguay, another Syrian man was detained traveling on a stolen Greek passport.

But Greek officials denied on Nov.29 that Abdelhamid Abaaoud, named as the alleged ringleader of the Paris attacks, had been in Greece. French officials indicated they thought he had used Greece to get from Syria to the rest of Europe. Abaaoud, who died in the police raid in St. Denis several days after the Paris attacks, had bragged he was able to slip in and out of Europe without being detected.