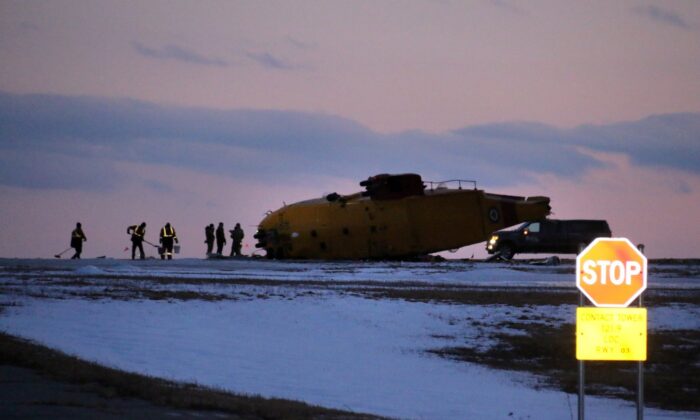 Two military members were in hospital Thursday evening after a search and rescue helicopter crashed at 9 Wing Gander air force base in central Newfoundland, officials said.

The injured were among six crew members on board the CH-149 Cormorant aircraft when the afternoon crash occurred, the Royal Canadian Air Force said in a series of tweets. The helicopter was conducting “hovering manoeuvres” at the Gander airport, which is next to the airbase, the tweets said.

“Two members are currently in hospital receiving treatment,” the air force said shortly after 6 p.m. local time. “Four members have been released and are with their squadron members at this time.”

Officials would not comment on the condition of the hospitalized crew members. The air force said earlier that first responders had been called to the scene.

On Thursday evening, emergency crews continued to work around the aircraft, which was on its side with its tail apparently missing.

CH-149 Cormorant helicopters are long-range aircraft that can operate in severe conditions, according to the air force’s website. The aircraft’s frame is nearly 23 metres long, and its rotor span is 18.5 metres.

The air force said its flight safety directorate launched an immediate investigation into what happened.