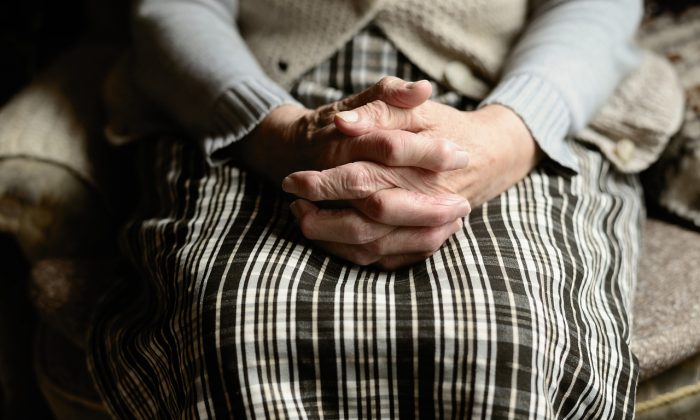 Hands of an elderly woman in a stock photo. (congerdesign/Pixabay)
US News

Two Tennessee nursing aides have been fired after a social media post showed them posing on a patient lift and joking in the caption about dropping “your grandma later.”

A screenshot of the post featuring the two women—identified as Cassie Moses and Symara Rakestraw—was shared on social media by a woman who recently lost her mother at a nursing home and told News Channel 9 the post was offensive.

“I felt the caption that was very disgusting, inappropriate, and I don’t think that dropping anyone’s grandma, mother, and dad is funny at all,” Kristine Blankenship told the news outlet.

The photo shows a beaming Moses in the foreground with Rakestraw behind her sitting in the basket of the lift. The caption—playing off the viral meme “Feeling cute, might delete later”— says: “Felt cute… might drop your grandma later.”

Blankenship shared the post on her Facebook page on July 21, writing: “This was sent to me this morning. Not funny at all! I lost my mom in law and my friend just lost his mom due to neglect and abuse!! Shame on you!!”

Blankenship told the news outlet her mother experienced a fall at a nursing home in Chattanooga and later died.

“She had a fall and failure to thrive,” she told News Channel 9.

Nurse Denied Marathon Record Because She Didn’t Wear a Dress

Moses and Rakestraw told News Channel 9 they had both since lost their jobs.

“I’m sorry that it was a poor choice of words,” Moses told the news outlet. “It was a joke.”

The women said the photo was several years old and was not taken at the nursing home from which they were fired.

“To take the picture and manipulate and twist it into something that it’s not to destroy people’s lives, to me, is a sick person,” Rakestraw said.

“It’s getting out of control,” Moses added, saying that the two were considering suing Blankenship for stalking and harassment.

In an apparent reference to the attention storm the story has sparked, Rakestraw posted a meme on her Facebook page, showing the Halloween horror movie character Michael Myers—a homicidal stalker—with the caption: “I can’t deal lol.”

Blankenship also shared what appear to be screenshots of messages from Moses and Rakestraw, with the latter saying: “Please stop social media stalking people. It’s very weird. You’re like a bully.”

Moses wrote, “What you’re doing is slander and harassment.”

“Kristine Katafias Blankenship was not trolling,” one commenter wrote. “This was sent to her. The girls messaged her with distasteful messages and she never responded to them. This is not a harassment case. They are angry because they were called out on a ‘distasteful joke!’ She only reposted the screenshot sent to her to bring awareness. Elderly care is very serious. For someone that knows from experience she simply can’t take this ‘joke’ lightly.”

“I don’t think it’s funny at all. I have worked with the elderly for over 10 years and I could not imagine someone thinking this is funny. I would fire them too,” wrote another commenter.

Someone who claimed 17 years of experience in the medical field wrote: “Yes poor judgment on the girls actions. But health care workers at times have a stress relief humor that true should not put on social media. But on the other end of the spectrum here the one who made the complaint maybe a bit too sensitive about some thing that really did not involve her. At least not enough to cause the girls to lose their job.”

Another commenter, self-identified as Christine Dillard Abernathy, wrote a comment: “There should be a level of compassion inside anyone who works in this field or any caretaker field. I personally think it was a distasteful ‘joke.’ However even if they were joking I think the proper response should have been something on the lines of this, ‘I am so sorry for your loss and especially the fact that you recently lost a loved one due to neglect at a facility and while I assure you that my post was only a joke, I can certainly understand why you find it disturbing and that was never our intentions. We were merely make light of a long night and I am truly sorry that our joke found it’s way to your inbox but I can assure you we take great pride in our job caring for others and would never put anyone in harms way. Again please accept my apology on behalf of my friend and myself and again sorry for your loss’ but no instead of this they post things like these. Absolutely zero level of compassion shown and zero sympathy for the grieving daughter. The response speaks volumes.”

Abernathy included a screenshot of a dialogue apparently between Rakestraw and someone named Monique Choice, in which a comment attributed to Rakestraw says: “Man [expletive] em. Going to drop all their grandmas now. Bet this gets screenshotted too.”

Blankenship also wrote in the comments section, stating: “It saddens me that we even have to address issues like this. I love funny things and funny people. This was not funny!!”

“Adult abuse is real and so are the victims,” she added.