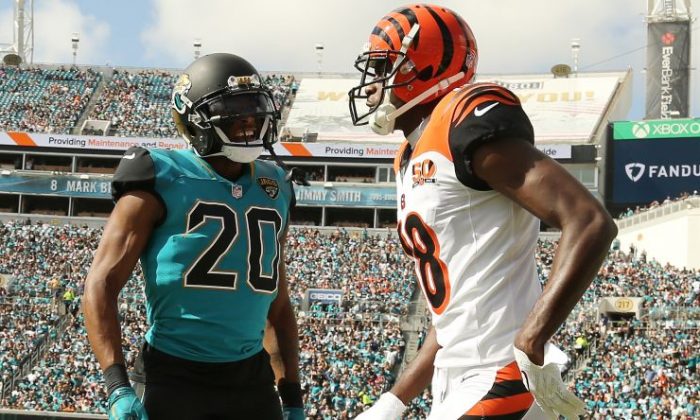 A.J. Green #18 of the Cincinnati Bengals and Jalen Ramsey #20 of the Jacksonville Jaguars discuss a play in the first half of their game at EverBank Field on Nov. 5, 2017, in Jacksonville, Fla. (Logan Bowles/Getty Images)
Entertainment News

With 10 seconds to go in the second quarter, Ramsey pushed Green in the back. Green then grabbed Ramsey in a headlock and threw him down before throwing punches at him. Then, he tried to take Ramsey down again before teammates tried to break it up.

Jalen Ramsey and AJ Green getting after it out there pic.twitter.com/dKHxrON8I4

It’s unclear if the league will take further punitive action against the two yet. If so, it’s likely that Green will face a more severe punishment.

After this… Massive fight broke out… pic.twitter.com/Rc1jAKJ3tl

Jalen Ramsey was ejected after getting choked and throw to the ground by AJ Green. Awful call to eject Ramsey. #JAXvsCIN pic.twitter.com/GPonju3f5k